Last year, the story of Utah Nurse Alex Wubbels, the RN at Utah State University Hospital who correctly refused to allow a police officer take blood from her unconscious patient in accordance with the hospital’s policy against it, went viral. Now, Jeff Payne, the police officer who forcibly arrested her and was later fired for his actions, is speaking out.

And his message? He did nothing wrong.

The video is shocking to watch and Salt Lake City and the University of Utah ultimately agreed that Wubbels had been mistreated, awarding her a $500,000 settlement after the incident.

After being placed on administrative leave, Payne was ultimately fired a month after the body camera footage was released, but he is speaking out for the first time, claiming that he feels he did everything “within the law and the policy.”

According to Payne, his supervisor, Lt. Tracy told him that he may have to arrest Wubbels if she continued to interfere with the police investigation, but after two hours of back-and-forth, Payne made the decision to proceed with the arrest on his own. “I had to do something and unfortunately, a lot of people didn't like what I did,” he explained in an interview.

The officer went onto defend his actions during Wubbels arrest, citing his “training” for how he physically handled her. He told Fox13 on November 5th, 2018, that when Wubbels pulled back as he reached for her, that constituted as resisting arrest and police training indicated that he must use “one force higher” during an arrest.

“…I got ahold of her and I escorted her outside,” he explained. “To me, I'm going above what her resistance was, just enough to get it done,” said Payne.

Payne’s interview revealed that he is insistent that he did nothing wrong and was only following his police department’s policy on blood draws on unconscious patients, as well as his training of how to handle an individual who is resisting arrest.

In his interview, he expressed bitterness towards how he was presented in the media, calling himself a “sacrificial lamb,” citing negativity about people who “hate cops,” and claiming that he was made to look as “horrible as possible to justify termination.”

Story Not Backed By Police Administration

However, police administration and the Logan Police Department are not backing his story; the Logan Department even said that they were not upset that he couldn’t get the blood draw, further collaborating that Payne used unnecessary, an excessive force for no reason.

Despite his superiors supporting the decision to terminate him, the 27-year-veteran is suing for wrongful termination and $1.5 million in damages. According to Payne, he holds no ill will towards Wubbels and believes that both parties involved were just doing their jobs, but because they conflicted, he is the one that “bears most of the burden from this.”

The dismissed officer claims that unlike former Olympic skier Wubbels, his life has been ruined as a result of their encounter. According to Payne, he is working a job that barely pays minimum wage and struggling to keep his household together.

“My life is destroyed because of this and I don’t know how many years it’s going to take to have some sort of peace,” he told the news station.

The scene was as follows: Jeff Payne is a phlebotomist with the Salt Lake City Police Department and according to his story, police from bordering city Logan in Cache County, where a hit-and-run had occurred, resulting in the patient being taken to the Utah hospital, asked Payne to go to the hospital to collect the blood.

As body camera footage revealed, the trouble began when Wubbels, backed by her supervisor whom she was speaking to over the phone, calmly read the hospital’s policy prohibiting blood draws on unconscious patients to Payne. She reminds him that the policy, which the police department worked with the hospital to set up, does not allow for blood to be drawn from an unconscious patient unless that patient is under an active arrest or a warrant is present.

Neither instances were true for her patient. Wubbels stood her ground.

In the video, Wubbels appears confused and hesitant, as I imagine any of us would be when faced with an armed officer on our unit that is so clearly in violation of a pretty standard policy regarding unconscious patients. It’s hard to place yourself in your shoes (or Crocs?) and wonder what you would have done in the same situation.

As she continues to speak with the officer, noting that the policy is out of her hands, remarking, “I have no idea why he’s blaming me,” to the voice on the phone, who then tells the officer, “You’re making a big mistake,” the video shows Payne then appear to angrily lunge at Wubbels, shouting, “We’re done, you’re under arrest, you’re going,” before forcing handcuffs on her and pushing her outside, all while she continues to scream in terror. As the video shows flashes of her blonde hair across the camera, you can hear her yell, “Someone help me!”

This is a developing story, check back for further updates. 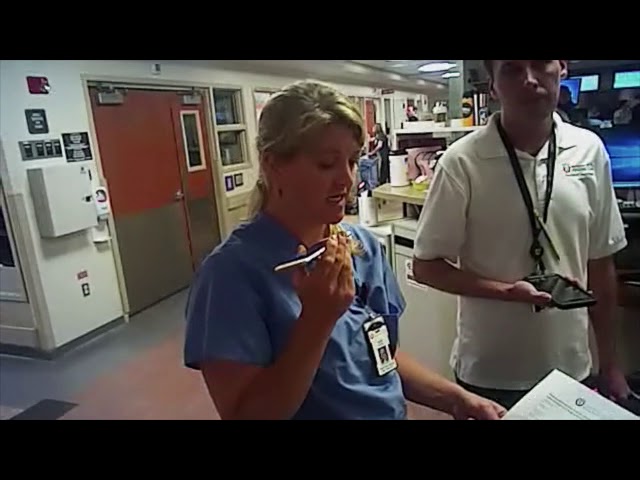