For centuries, present-day Israel has been a land of great strife, a place violently debated at the expense of many humans lives, year after year. This turmoil between Palestinians and Israelites dates back to as early as the 1900s. Decades of a brutal power struggle has led to multiple redefining of borders and hundreds of deaths, making this holy land to so many faiths around the world, a tumultuous and troubled one.

What began as a protest against Israeli occupation in March 2018 along the border of the Gaza Strip, became increasingly heated when the United States moved the US Embassy from Tel Aviv to Jerusalem in mid-May. By June, the protest had yielded the highest death toll the area had seen in years. One demonstrator, who was walking about 100 meters from the border, was suddenly hit in the head by a tear gas container.

In stepped a fearless 21-year-old nurse, Razan Ashraff Al-Najjar. She had been providing medical assistance at these protests for months and was well known for her ambition, strength, and bravery. She was passionate about serving her country’s cause by providing healing hands in a place where there was so much hurt. She was passionate, caring, and some could even say, a feminist. The brave act of treating the wounded amongst the chaos at the border of Gaza Strip was a statement of rebellion: “In our society women are often judged,” she said in an interview with the New York Times before her death, [but if society doesn’t] want to accept us by choice, they will be forced to accept us because we have more strength than any man…being a medic is not only a job for a man. It’s for women, too.”

And tragically, as she approached the border to assist the wounded protester, she was shot through the chest by an Israeli sniper positioned on the other side of the border. Razan was wearing all white, the typical medic uniform. She had her hands up to signify that she was unarmed. She had already spent hours in the turmoil, dressing wounds, assisting injuries, and bringing healing to those around her. 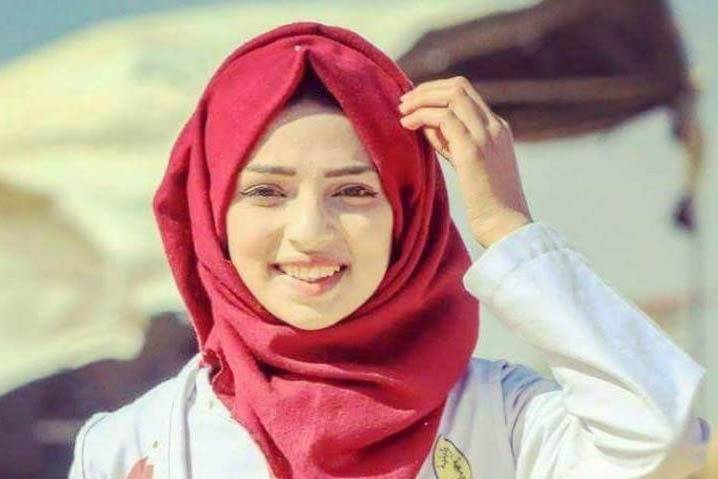 The next day, her Palestinian community mourned her gravely. The lovely, brave nurse was killed while attempting to heal the wounds of others. On the day of her funeral, her mother exclaimed:

“This is my daughter’s weapon with which she was [fighting.]” The woman [held] up two unopened bandage rolls she had found in [her daughter’s] vest and said, “These were her ammunition."

Razan's death is not only tragic because she was young or even selfless, which by all accounts, she was. It is also a horrific violation of medical neutrality, an occurrence that has been steadily increasing in war-stricken countries.

A march of solidarity

When Razan was killed, it wasn’t just her community in Palestine who mourned. Protesters on the Stateside in Philadelphia marched in solidarity of her death, of the poor protections for medical workers in warzones, and of the occupation of Israel. 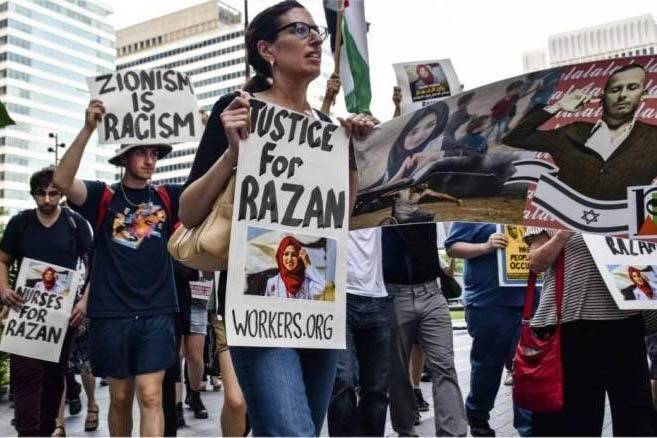 Others took to social media to raise awareness of her story and the devastation of her death:

I need you to SAY her name. I need you to REMEMBER her name. This is Razan Alnajjar, a 21 year old nurse that was shot in the chest and killed by an Israeli sniper as she treated wounded protesters in Gaza today. She was one of the first female medical volunteers to treat the protesters weekly. According to her colleagues, she previously fainted twice due to gas inhalatio and on April 13th she broke her wrist after falling while running to attend to a wounded protester. This was her tenth protest serving as a field nurse. She was interviewed by the @nytimes last month and they asked her why she did this. To which she responded, “Our job is to save lives and evacuate people. We don’t do it for money, we do it for God. We don’t want to get paid or be employed”. _ . Targeting medics is a war crime under the Geneva convention. We can’t ignore the genocide. We can’t sleep on oppression. We wont live silently. This is genocide. This is systemic oppression. _ . You have returned to God in the best of months, in the most valiant of ways. May you be honored. May your family be honored and may you attain the highest level of paradise. Al- Fatiha. . . إنا لله وإنا إليه راجعون

Many members of the online community have immortalized this brave humanitarian, creating cartoons, images, poems, and songs about her story, her passion, and the message she left behind. Some have named her the “Princess of Return,” in regard to the “Great March Return” protests in which she was volunteering.

The Princess of Return, #RazanAlNajjar, is the youngest Palestinian volunteering paramedic whose worry was to save lives until an Israeli terrorist sniper deliberately targeted & murdered. #GreatReturnMarch

Although the protests continue, Razan’s memory will likely live on. Her mother and her sister, inspired by Razan’s passion to serve her community, have become volunteer health workers, providing medical assistance to victims of violent acts at the border of the Gaza Strip.

"I felt that my heart stopped and I said, 'My daughter Razan died.'"

This Palestinian woman became a paramedic after her daughter was killed by Israeli forces. pic.twitter.com/IvqJlQbpUU

“We do this [volunteer work] for the love of our country. It’s humanitarian work. We don’t do it for money, we do it for God. We don’t want to get paid or be employed…[We] have one goal – to save lives and evacuate people. And to send a message to the world: without weapons, we can do anything.” – Razan Al-Najjar

Next Up: Joe Biden Thanks Hospice Nurses Who Cared For His Family