Get the latest news for nurses
INDUSTRY
April 19, 2022

What are Compact Nursing States?

Compact nursing states refers to the Nursing Licensure Compact (NLC), which is an agreement between states that allows nurses to have one compact state nursing license that gives them the ability to practice in other states that are part of the agreement.

Originally developed in 2000, by 2015 the license had grown to include 25 states. To help streamline the process for nurses the Enhanced Nursing Licensure Compact (eNLC) was implemented in 2018 and included standards for licensure which the originally compact license was lacking.

For example, the NLC did not require applicants to undergo state and federal fingerprint-based criminal background checks, whereas the new eNLC does.

>> Click to See the Highest Paying Jobs for Nurses in 2022

Here’s a comprehensive listing of all states currently impacted by multi-state compact licensing.

Twenty-four of the original NLC states have enacted the eNLC or have pending legislation. Eight additional states have pending legislation waiting for approval before joining the eNLC. Additionally, two states including the Virgin Islands have enacted the eNLC and are awaiting implementation.  As of April 18th, 2022, there are currently thirty-nine states part of the eNLC.

Ohio has announced an implementation start date of January 1st, 2023.  Pennsylvania and the Virgin Islands has passed legislation allowing for the eNLC but is currently awaiting implementation. There is no start date at this time.

Why are Nursing Compact States Important?

Goals were developed for every state to become a member of the NLC but there has been ongoing resistance from some states regarding the requirements for licensure. While the eNLC continues to grow, there are still states that still do not want to be included in the license. Even in states that have legislation pending there is some push back from the state nursing association.

The eNLC became effective on July 20, 2017, which allowed the Interstate Commission of Nurse Licensure Compact Administration to begin drafting appropriate rules and regulations for the new licensure.

In January 2018, the new multi-state licenses were issued to all nurses who applied to transition from the old license. New nurses getting their first license in an eNLC state will be able to practice in all eNLC states without delay. This option is highly effective for travelers who do not wish to waste time between contracts. Furthermore, it helps reduce costs on application fees and license renewals. Unfortunately, Hawaii is not currently part of the eNLC and does not have any pending legislation. Hawaii is one of the most desirable states for travel nurses in the U.S.

Each eNLC state is responsible to notify nurses by mail of the changes to the license and the process to obtain an enhanced compact license. As more states continue to join the eNLC, additional nurses will have the option to streamline if they hold multiple licenses.

What Do Nursing Compact States Mean For Nurses?

So what does this mean for nurses? Nurses who currently practice in states with pending legislation do not have to do anything until the bill(s) are passed. Once the state becomes a part of the eNLC, the state board will reach out to all nurses registered with the state. Nurses then will be required to ensure their permanent address is up to date with the state board in order to determine compact license eligibility.

Nurses that are NOT due for license renewal will not be required to pay an additional fee to transition to the eNLC. A new license will be issued to all nurses that meet requirements for the eNLC.

Nurses are highly encouraged to sign up for the Nursys e-Notify system which delivers real-time notifications about updates to the eNLC. It also will deliver information regarding expirations, renewals, and disciplinary actions. This service is free of charge and is a patient safety initiative that is supported by the U.S. Board of Nurses and NCSBN. More information can be found at www.nursys.com.

In terms of continuing education (CE) requirements, a nurse holding an eNLC must meet the CE requirements for his or her own state. Each state, regardless of the eNLC, requires specific CE courses and a specific number of hours. Renewal requirements are only related to the state that issued the eNLC, not the state in which the nurse practices.

States with Pending Legislation for the eNLC

For many states, the COVID-19 pandemic illustrated the need to lessen regulatory burdens on nursing licensure. Because of this, many states were able to start legislation towards implementation. Furthermore, some state nursing associations have supported bills that previously they were against.

Since the last update, several key states have put out legislation to implement the eNLC. Alaska and New York both have legislation pending. This is monumental as both are key states for travel nurses. With the implementation of the eNLC, Alaska will be able to more easily get staff. The Alaska board of nursing at one point did not favor the compact license; however, after overwhelming support from nurses within the state - the board now supports the legislation.

According to a survey conducted in 2019 by the Alaska Division of Corporations, Business, and Professional Licensing, 89% of Alaskan resident nurses are in favor of joining the compact license and 87% would apply for a compact nurse license if available.

Washington once again has legislation pending for the eNLC. Interestingly, this has happened before however, it was denied at the state level.

Washington specifically, is hoping to enact the eNLC to curb the ongoing nursing shortage. They are hoping this time the legislation will stick. According to a WSHA policy brief, from Feb. 1 to May 31, 2020, 59% of qualified nurses who applied for a license in Washington were from an eNLC state. However, opponents stated that joining the eNLC will cut down on revenue generated from single state licenses but also point to the current nursing shortage issues in Washington are related to other factors besides licensure.

States without Legislation for the eNLC

Since the last update, California no longer has legislation for the eNLC. It was denied at both the statehouse and senate levels.

The Commission has developed 11 uniform licensure requirements for a multistate license.

An applicant must meet each of the aforementioned requirements in order to apply for the eNLC. These requirements are specific only to the eNLC and were developed in hopes that all states would eventually join the eNLC.

The Board carefully reviewed each state’s requirements for licensure and included specifics in order to increase eNLC participation.

The NLC and eNLC are supported by many organizations throughout the country. A few of these include:

Unfortunately, some states and organizations do not support eNLC. Interestingly, a study conducted in 2014 indicated 70% of nurses were in favor of their state joining the compact license.

Major concerns from states unwilling to join the eNLC at this time are:

While some states are hesitant to enact the eNLC, according to the NCSBN there are over 2 million nurses currently residing in eNLC states that have the opportunity to practice in other compact states.  Nurses holding compact licenses are more desirable as they can take immediate job vacancies without waiting for licensure. The NCSBN also stresses that nurses with a compact license can:

If you reside in any of the states affected, you should stay updated on the latest developments as individual state boards begin the transition.

Here are a few helpful resources: 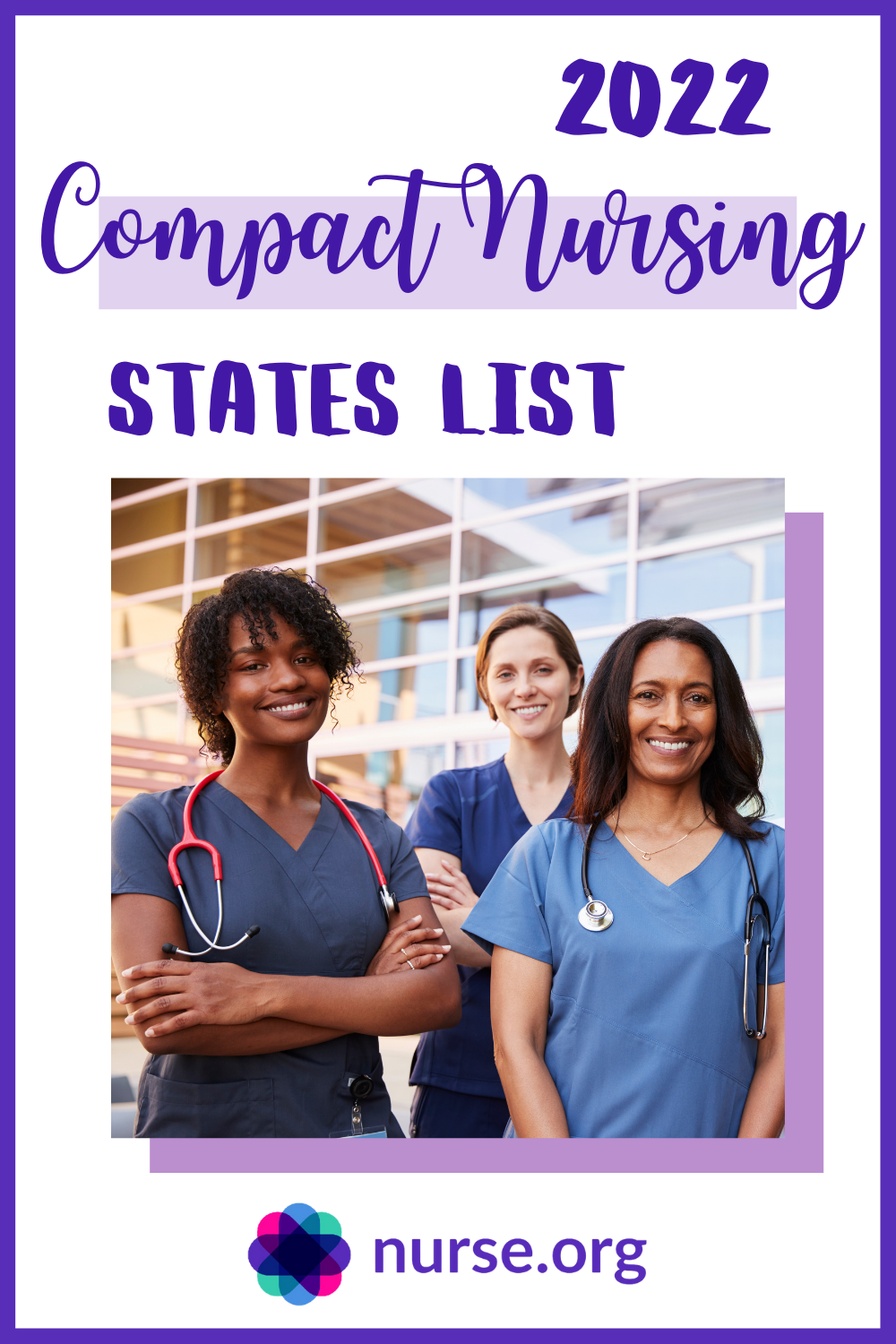