How to Become a Military Nurse 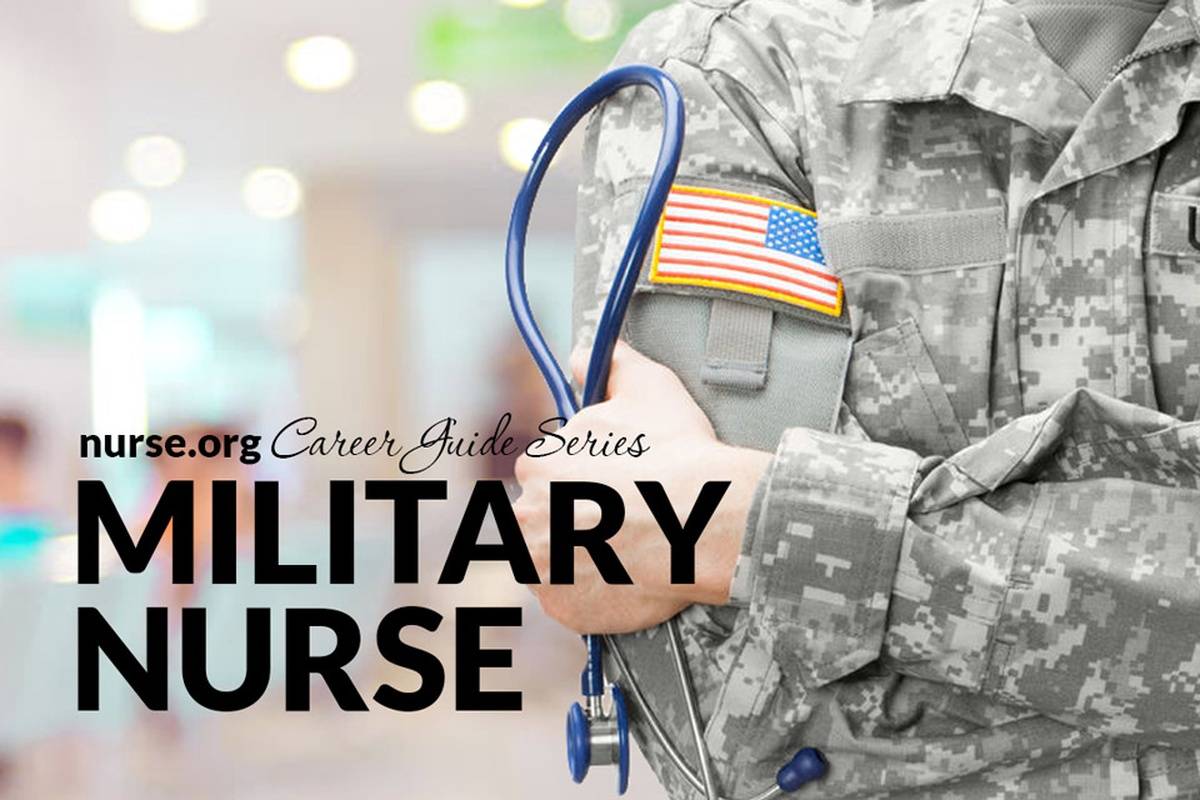 The United States Army Nurse Corps was established in 1901, and since then nurses have played a pivotal role throughout history as caretakers for the heroic men and women who fight to defend our freedom.

Now, nurses who wish to serve their country can be part of the Nurse Corps of any major military branch – Navy, Air Force, Army, and Coast Guard.

Part One What is Military Nursing?

Military nursing shares many similarities to civilian nursing, in which the common goal is to treat patients and promote their well-being.

However, military nursing is a career under starkly different circumstances.

Military nurses might work either at home or in foreign countries. The most common settings for military nurses to work include military bases, military hospitals, and clinics.

These nurses may also work in hospitals or global response centers alongside deployed military personnel during natural disasters or times of war. Military nurses can work in potentially dangerous environments, like foreign war zones, and work under extremely stressful conditions.

Military nurses also have to be prepared to deal with the emotional demands of working in war conditions. As a reward for the extreme sacrifice and dedication of military nurses, the career also comes with amazing access to healthcare benefits, education, and the opportunity to rise in rank.

Part Two How To Become a Military Nurse

Serving your country in the capacity of a military nurse is a great honor and privilege. It will also set you up for lifelong success beyond your time in service.

6 Steps to Becoming a Military Nurse

The main certifications you will need are a Bachelor’s degree and an active RN license from a non-compact state. You will also need to be certified in Basic Life Support (BLS).

Part Four What is The Military Ranking System?

The military as a whole operates under a ranking system, and military nursing is no exception.

Rank structure determines pay grade and responsibilities based on your level of experience. Upon becoming a military nurse, you start as an Officer with the lowest pay grade “O-1” (Military Ranks). With further experience, specialty training, or education, your pay grade and rank climbs up.

For example, as a military nurse in the Army, you would start as Second Lieutenant, then First Lieutenant, Captain, Major, and so on. With each earned rank, different responsibilities and higher pay grade are awarded.

The salary range of a military nurse ranges from $58,000 on upward. Your salary as a military nurse is based on your education level upon commissioning, your rank, and any special certifications you may hold.

In addition to your salary, you will have the option to accept a sign-on bonus or student loan repayment. A person who is a registered nurse and agrees to accept a commission as an officer may be paid an accession bonus of up to $30,000 for a four-year contract or up to $20,000 for a three-year contract.

Nurses who choose to accept the student loan repayment have the option of having their loans repaid up to a maximum of $40,000 per year.

The benefits of becoming a Nurse in the military are numerous! You are provided with the tools you need to develop your career and continue training and growing as you become a respected leader in your field.

You’ll also enjoy a reasonable work-life balance that provides plenty of time for family and recreational pursuits. The amount of your housing allowance and food stipend are dependent upon your rank, but as you get promoted these stipends increase.

Pay increases in the military rely on many factors. Moving up in rank is the number one factor. This will increase not only your pay but also the stipends that you are allotted. Deployments will offer you things such as hazardous pay for the time you are deployed.

In the military, nurses have many opportunities to advance their rank and assume more responsibilities. Commissioned Officers in the Army Nurse Corps hold the following ranks:

There are three pathways for advancement: Clinical/Operational, Staff, and Executive/Leadership.

The clinical track is characterized by a solid clinical foundation with progression as a field grade officer into advanced practice nursing, clinical specialist, element leader, and flight commander roles.

While in the clinical/operational track, you can incrementally acquire the executive skills required for entry into the executive/leadership track.

In the staff track you will branch out to jobs or specialties such as readiness, quality, health promotion, prevention, case management, research, and education/training.

Squadron or group level staff jobs are an integral part of day-to-day business and overlap into the operational track. To advance within this pathway, you should develop your specialty to be competitive in major command or lead agent positions.

The executive leadership track springboards from the operational and staff tracks and affords you the opportunity for potential promotion to colonel.

In this track, you must have a solid operational background with an intermingling of staff jobs. Officers in this track possess executive skills,  solid command potential, and the appropriate level of Professional Military Education (PME).

These tracks aren’t set in stone, and movement between them is possible during the first half of your career. However, as your seniority increases, flexibility to switch tracks becomes limited.

The number of nurses and nursing students who wish to join the military and serve their country while helping their fellow men has greatly increased. There is a positive increase in the job outlook in military nursing occurring over the next decade predicted to be between 19% to 26%.

Part Seven What Does a Military Nurse Do?

Military nurses carry out similar responsibilities as traditional nurses in hospital or outpatient facilities. Upon arriving at their assigned area, military nurses may check in with their direct supervisors and perform care in a particular setting. If nurses are delegated to work in a hospital or clinic, common responsibilities include patient assessment, passing medications, and working with other healthcare professionals.

Patients in these settings are commonly military personnel, their families, or any other military employees in local support roles such as diplomats and educators.

In areas of active war, military nurses may serve to triage patients or stabilize and treat patients with life-threatening injuries, like wounds from explosives and gunshots.

There are many things to consider before making the choice to become a military nurse.

There is a huge commitment involved with such a decision. You are not just a nurse, but you are also an active member of the Armed Forces. You will have to be deployed, many times for lengths varying 6 months to a year.

Other things to consider before joining the military are your future plans. For example:

All these are great questions to think about and consider in your decision to join the military.

The field of military nursing is fast-paced and can be emotionally, physically, and intellectually demanding. For the right candidate, it is an excellent opportunity for travel and personal and professional growth.

What is the difference between hospital corpsmen and military nurses?

The primary difference is that Hospital Corpsmen are enlisted military personnel and military nurses are officers. Hospital Corpsmen perform various roles within the military’s medical field. Some Corpsmen operate biomedical equipment, some serve as operating room techs, some are trained to perform dental repairs, some deliver emergency care in the field, and some are assigned clerical duties.

As a Corpsman, you are required to enlist for five years in the military. You must have a high school diploma or equivalent and a score of 146 on the Armed Services Vocational Aptitude Battery.

Upon enlisting as a Corpsman, you must complete an initial 7-9 week “Boot Camp” and then technical training in medical education based on specific curriculum set by the military. As an enlisted member of the military, pay grade starts lower than military nurses ($1,566.90/month as a new enlistee) with similar opportunities to move up in rank and pay grade based on years of service.

What is it like to be a military nurse?

Nurses in the military provide nursing care for wounded and ill soldiers wherever they are stationed around the world. During combat, military nurses provide care on the front line overseas.

Military nurses sign-up for a period of service and can be assigned to any position based on ability and need. They have the opportunity to travel to different countries as well as different states to live, work, and complete assigned training.

Your clinical skills will be kept sharp, your ability to think critically will develop quickly, and your time-management skills will be tested in such a fast-paced environment. Being a military nurse is one of the highest levels of nursing care one can achieve.

Where Can I Learn More About Military Nursing?

Click to learn more about the Air Force Nursing

Click to learn more about Navy and Coast Guard Nursing

Why Did You Choose to Join the Military?

I chose to join the military because I always wanted to serve my country in a larger capacity. I knew I wanted to be a nurse and I knew that being a nurse in the military would come with great benefits.

On top of my own personal goals of continuing my education, I have family members that are prior military as well as a brother who is currently still serving 20+ years in the Army. I was able to look at what the military has offered him in helping to formulate my decision.

What Did You Do Before Joining the Military?

Before joining the military, I was a student at the University of South Carolina Upstate in Spartanburg, SC. I had excellent professors that taught me all throughout my undergraduate career. I graduated USC Upstate December 15, 2015, studied for the NCLEX and passed in January of 2016.

The immense knowledge and guidance I received was far beyond what I could have expected as a new graduate. It was during the year of 2016 that I also was presented with an opportunity to join the Air Force. This opportunity came sooner than expected but I was thankful!

After a long application process and with the help of a recruiter, I found out I was accepted into the Air Force Nurse Corp in the beginning of 2017.

After working over a year and a half at Mayo Clinic, I said goodbye to the best hospital foundation I could have had a new graduate.

Beginning in Aug of 2017 I completed my five-week training course at Maxwell AFB in Alabama and from that point on I have been Active Duty in the operational Air Force as a Critical Care Nurse!