2021 was a year for nurses and while there are many things that could be said about that, we’re just going to bring some good news out of it:

For an impressive 20-year running, nursing was rated as the most trusted profession once again in 2021, according to a Gallup poll. To be perfectly frank, 2021 saw some marked changes in how some professions are perceived in trustworthiness—military officers, for example, fell by a full 10 points from 2017 and even grade-school teachers dropped to almost all-time lows.

It appears that American people are more cautious about who they are handing out their trustworthy badges to, so that makes the fact that nursing nabbed the #1 spot yet again—for the 20th year in a row!—all the more impressive.

Who’s at the Top

The Gallup Honesty and Ethics poll originated back in 1976 and has been conducted every year since 1990. If you’re doing the math that means that–yup–nurses have ranked as #1 almost the entire time. (The only year they were displaced was after 2001, when firefighters claimed the top spot, understandably.)

2021’s poll was conducted between December 1-16 among Americans and the results placed nurses above medical doctors as the most trusted profession. 81% of Americans ranked nurses as trustworthy based on the Gallup poll scale of “very high, high, average, low or very low.” Last year, nurses garnered even more trustworthiness at 89% ranking, but we’ll just say it’s been a tumultuous year, so those high marks are still very impressive.

Medical doctors landed in second place, falling behind nurses as the most trustworthy by a full 14 points or only 67% of Americans ranking them.

The other three professions deemed the most trustworthy were 3) grade school teachers (64%) 4) pharmacists (63%) and 5) military officers, although as we noted, while they’re still at the top, they did drop in their overall percentage (61%). More than 6 in every 10 Americans deemed each of these professions as “highly ethical.”

Here’s the full breakdown of how the top 5 professions ranked by trustworthiness:

And while they didn’t make the top 5, the 2021 poll also had two new professions crack its top category: both police officers and daycare providers are now considered “exemplary” in both honesty and ethics by at least half of the American people.

Who’s at the Bottom

The bottom-dwellers of the Gallup poll included professions such as lobbyists, car salespeople and members of Congress, all who had less than 10% of Americans rank them as having high or very high ethics. Lobbyists and Congress members tied for the worst-rated, with 6 out of 10 Americans ranking their ethics as “low” while only 4 out of 10 Americans gave car salespeople the same ranking. (This is actually really sad when you think about it, am I right?)

Overall, everyone in the bottom 15 professions received less than 38% “high” rankings from only as few as 5% of Americans. 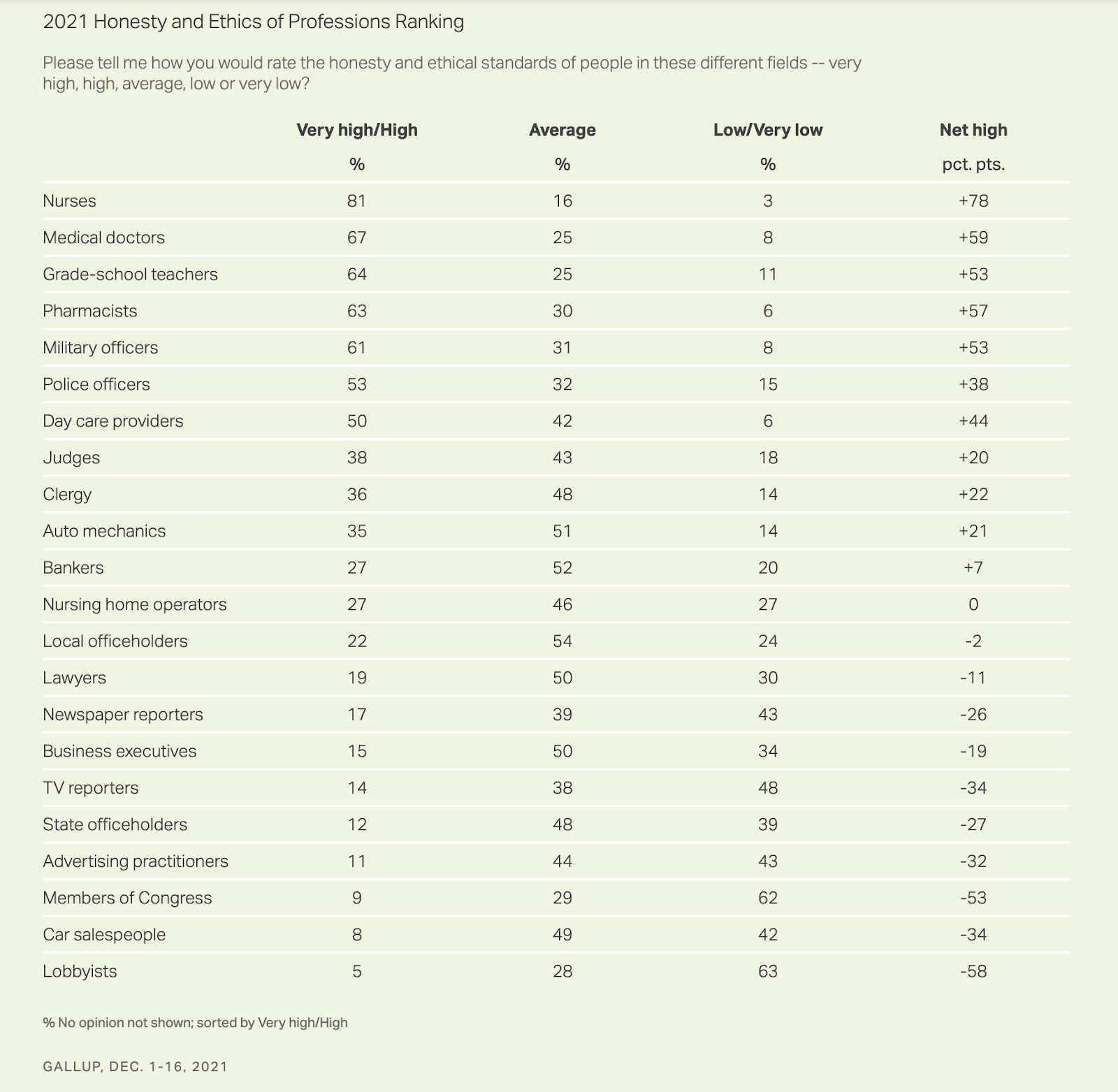 Last year’s poll did show a marked difference in how political beliefs impact the perception of different occupations. For instance, responders who identified as Republican were more likely to rank clergy and police officers higher while Democrats tended to rank professions like TV reporters, teachers, medical doctors, and pharmacists higher.

The American Nurses Association (ANA) penned a press release congratulating the country’s over 4.3 million nurses for achieving what is undoubtedly a great honor. “I want to congratulate every nurse across the nation for earning this well-deserved recognition,” said ANA President Ernest Grant, PHD, RN, FAAN. “The fact that this is the 20th year in a row that the American public has voted nurses #1 is a testament to your consistent professionalism, despite the challenges of the persistent pandemic.  We are all indebted to you and will continue to acknowledge and honor your courage, commitment, and expertise during the COVID-19 pandemic and well beyond.”

The ANA also noted how the poll’s results reflect the trust that the American people have in nurses, even through a challenging pandemic, and the work that nurses everywhere have done to earn that trust.

And while the Gallup poll results represent an impressive achievement for the nursing profession as a whole, it also represents a slight decrease in the perception of the healthcare profession as a whole, with both medical doctors and nurses seeing a drop in numbers from last year. While still ranking high, it’s a sobering reminder of the damage this pandemic has done and how much work lies ahead in supporting healthcare workers.

“2021 was an incredibly difficult year for individual nurses, and the nursing profession. Many suffered greatly while playing a critical role in the colossal response and recovery efforts to end the COVID-19 pandemic,” added Grant. “I am deeply concerned about not only the impact of the pandemic on the mental health and well-being of individual nurses, but on the health of the entire nursing profession. The pandemic has exacerbated a long-standing nursing shortage, especially in areas experiencing high numbers of COVID-19 cases.

“The long-term repercussions and consequences for the profession, the entire health care delivery system, and ultimately, on the health of the nation are potentially dire,” he added. “It is imperative that the federal and private sectors work with nurses and seek their input to provide solutions that lead to action to solve this crisis and do so with a sense of urgency.”