Get the latest news for nurses
NEWS
October 4, 2017

Nurse Shot In Vegas Massacre Treated Her Own Bullet Wounds

Vanderstay was shot in the stomach and her leg was torn apart by shrapnel. She was trampled as she hunkered down with a group of strangers - quickly losing blood and trying to hand on to her own life. 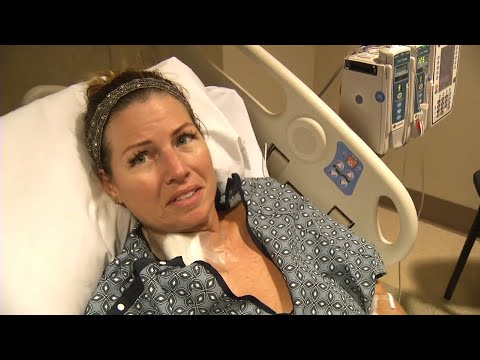 Hardly able to speak, through her tears, she recalls the moment she was shot to the Associated Press “it felt like a huge baseball, just the force of it going through my stomach.” She noticed that her leg was also badly wounded and was quickly bleeding out. With nothing to stop the bleeding Vanderstay wrapped the leg tightly in a flannel shirt, searching for a way out.

She recalled that dreadful moment, “I said, ‘OK, I can’t stay here. I’m going to bleed out.’ It hurt so bad.”

Badly wounded, Vanderstay hopped a fence to find shelter - still wanting to help people but, being physically unable to. “There were people that were dead. There was a guy, his eye was blown out, and I couldn’t help him,” she said. Thanks to a quick-thinking taxi-driver and a group on good samaritans who helped put pressure on her wound, Nurse Vanderstay was taken to University Hospital and survived.

She credits her taxi driver his quick thinking, “if it wasn’t for that cab driver, I wouldn’t be here,” she continued, “And I don’t know who he is. He did everything to get me here.” Her taxi driver could have easily taken her to the closest hospital but, he knew she wouldn't have been seen fast enough there. Instead, he took her to University Hospital - the level 1 trauma center.

Once at the trauma center Vanderstay underwent surgery to have her colon and small intestine resectioned.

As of Tuesday, over 500 people have been injured in the attack - 59 confirmed dead.

Renae Huening, a nurse at Sunrise Hospital recalled following a “trail of blood” into the hospital on the way to her shift that night. She said when she arrived the ER was cramped with patients - in the lobby and hallways. “The air smells like iron,” she recalled. Victims were coming in with wounds that are typically only seen in war zones.

Sunrise Hospital - the facility closest to the attack was inundated with victims and admitted 214 patients within three hours. This is nearly the amount of patients they admit per day.

We’ve heard countless stories of everyday citizens who sprung into action to save the lives of others during the attack. Registered, Sonny Melton, shielded his wife from bullets and was killed - he saved her life. He is remembered as a loving husband and true hero. As our nation continues to heal and mourn such heartbreaking loss of life, hearing the voices of survivors may give us hope. Hearing the stories of heroism, faith, and unsurmountable love has the power to help heal us all.