Nurse’s Photo Goes Viral And The Reason Is Powerful

I don’t want you to just click like on this photo and scroll on. I want you to stop and really look at it for a minute. 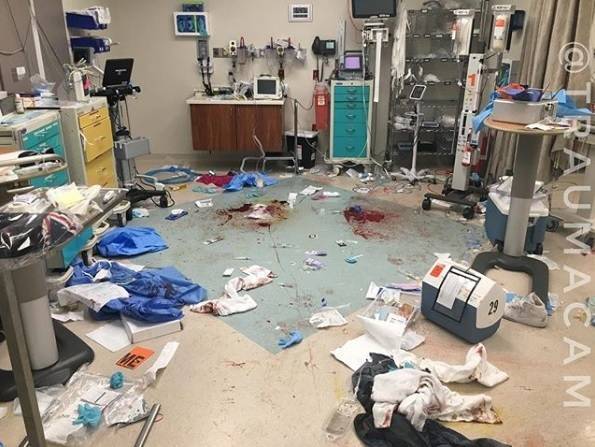 What is the first thing you notice?

Most say the blood, some say the overall look of chaos, some even note the ice chests.

You know what I notice?

I see the shoe in the right lower corner. The heart rhythm strip hanging from the monitor that shows the last electrical impulses of a man’s heart rate traced upon it. I notice the work that was done and how sometimes, despite what we know, train for, what we give, and how hard we try, it’s just not someone’s day.  Yes, it’s a cool photo, and there are a lot more like this, some of which have even had nurses fired for exposing the ‘insensitive and graphic nature” of the job. The cold hard fact is that this captured scene occurs in emergency rooms, intensive care units, operating rooms, ambulances and streets all over this nation, hundreds of times a day.

I don’t care how seasoned you are, how many codes you’ve worked, how jaded you claim to be. In that pivotal moment when the final question is asked, “Does anyone have any objections to calling it?”, and you look around at the faces in the room, adrenaline-soaked, sweating and flushed, not a word is said. Because in reality, we all know. For a few seconds that can seem like minutes, you feel defeated and you ask yourself if you did enough. Did I do it right? What could I have done better? At that moment it all stops. The alarms are silenced, monitors cleared, pumps are turned off, gloves and gowns are thrown down in a myriad of emotion.  It’s over; you lost one. The room clears out and this is what you have left of someone’s life. Their memories, relationships, mistakes and triumphs, all reduced to a puddle of blood, trash and one shoe on the floor.

It’s easy to separate yourself from these scenes. In fact, as healthcare professionals, we have to. Less than 5 minutes after this code, I returned to the ER floor where I was yelled at by a patient with back pain because I had forgotten to bring him graham crackers. But he doesn’t understand. He can’t understand. We adhere to that title in our name; professionals. The problem is, we are also human. That human element is what makes us great caregivers. It is what allows us to bond, to share, to empathize. It is what gives us compassion and the drive to do everything possible to save a life.

An exercise in detachment

The truth is, some can’t do it, in fact, many can’t. You devote a large portion of your life to improve others. You study, learn, test, practice, train and teach. Not just at the start but for the rest of your career. It never stops. You give an enormous part of yourself AND your family. Physically, emotionally and socially.  So, remember my fellow doctors, advanced practitioners, nurses, medics, emergency medical technicians, first responders, firefighters, police and students, never forget the human element. Never take your role in someone’s life for granted. And most importantly, never forget to save a piece of yourself. Your family, coworkers, staff and your patients are counting on that.

The Story Behind The Photo

I didn’t think that when I posted this picture and caption it would have such an impact on a community the way it did! This photo has actually been set as my desktop background for over a year now and every time I turn my computer on, I see it, and It serves as a reminder for why I do what I do and to not take my life or family for granted.

If everything went right, the outcome most likely wouldn’t have changed, but the mind wanders. That is why I wrote this caption, because I know most healthcare providers do not like to admit that they are affected by these types of tragedies, trust me I am one of them. “It’s just another day, this is what I do, it’s my job, death is part of life, it’s probably better he died instead of suffered, he should have worn his seatbelt, we did everything we could, just bad luck”, these are just a fraction of the statements I and thousands of other providers mutter to each other and ourselves to justify our nonchalance.

I understand it’s a way of coping, everyone has their ways. In the ER and EMS world you’ll see a lot of gallows and black humor. We make light of a situation despite that it is grim and hopeless. From the outside this can appear to be insensitive and heartless, but it is our way of discussing the realities of what happens while also maintaining our composure and human aspect. It is what we must do to keep a part of ourselves intact and move on to the next patient who is depending on us.

The purpose of the caption I posted was to evoke the emotions we often brush to the wayside and suppress. There is a time and place to feel those things, and there is nothing wrong with having strong feelings toward the tragedy and loss we witness, but we must be careful it doesn’t impact those we love, especially ourselves negatively.

Talk about it, make light of it, review it, learn from it but don’t suppress it.

Next Up: Nurse Commits Suicide Due to Reported Bullying at Work