Get the latest news for nurses
NEWS
February 1, 2022

Nurse Nina is Heading to the 2022 Beijing Olympics

Like Nina Roth, I also have a two-year-old that I chase around most days. But shared toddlerhood aside, that’s where our similarities end, because unlike me, Nina Roth, 33,  just so happens to be a professional athlete who is heading to the Beijing Olympics as a curler. If that wasn’t impressive enough - she did it all while also working full-time as a nurse on a post-COVID unit.

Talk about being an overachiever, right?

But truly, Roth, from McFarland, Wisconsin, is an inspiration to all of us and we’re especially proud to highlight all that she has accomplished in her career, while still serving her patients as a Registered Nurse. Here’s more about Roth and what to watch for as she competes.

Roth is a professional curler, which means her sport involves lots of time on the ice and upper body training. Curling is a sport that looks like it involves “sweeping” the ice, but it’s also one that is more challenging than it appears.

According to the United States Curling Association, curling was first played in Scotland in the early 16th century, and there are now over 1.5 million players around the world. Curling involves sliding stones on a sheet of ice toward a target area which is segmented into four concentric circles and is played in two teams, each with four players. Curling is commonly referred to as “chess on ice”.

So while training can certainly be time consuming and physically-intensive, Roth made the decision a long time ago to not let it take over what she feels are her unique abilities to serve her patients, community, and hospital as a nurse and supervisor at Select Specialty Hospital. A veteran nurse of 9 years, Roth continued to work full-time (3 12-hour shifts) throughout the pandemic while still training for the Olympics.

Her work at the hospital has led her to deal directly with COVID patients, specifically during their recovery time. For instance, according to the Milwaukee Journal Sentinel that profiled Roth, her unit often cares for patients who are having trouble weaning from the vent or need extra assistance as they get back to a new normal. And while she certainly would have been rightly justified in taking time off of work to train for the upcoming Olympics, Roth told the local news station that she felt a strong pull to remain working on the unit and doing the two activities that bring her the most fulfillment: curling and nursing.

“I would love to be able to focus 100% of my time on curling, but nursing is also a big passion of mine,” Roth told the paper. “And so if I wasn't doing at least a little bit of both, I wouldn't feel quite as fulfilled, I don't think.”

It appears that Roth’s work has been vital and unfortunately, as in many cases around the country, the fight against the virus still isn’t over. In Roth’s home state of Wisconsin, case numbers have still been on the climb and local health experts there say that the state has yet to see its peak for the Omicron variant—meaning Roth may just have her work cut out for her when she returns from the Olympics.

Fortunately, Roth is used to that: “I really don't want to slow down,” she told the paper before the holidays, during another surge. “I'm very much needed at my hospital and I love what I do. And even though it's very hard, I know that especially now I have an ability, and I have the training to be on the floor. I need to be there for my patients and for my hospital.”

So just how does Roth juggle making an Olympic return (this is the athlete’s second trip to the games—she also competed in Beijing in 2017) with being a nurse and taking care of a toddler? Well, as you can imagine, it’s a lot of juggling.

Roth described how typically, during her three shifts, she focuses just on squeezing in a short 20-minute workout at the end of the day before passing out to sleep. And on the days she’s off from the hospital, she gets up early to work out before her son wakes up, then spends the morning playing with her son, who will turn 2 when she’s at the games in February. After he’s appropriately worn out, she drops him off at his grandparents, then heads out to her actual training with her teammates.

Her schedule sounds exhausting and knowing what her body has been through with pregnancy and postpartum makes her accomplishments even that much more impressive. While the rest of her team was able to train during the COVID-19 shutdowns, Roth instead spent her time giving birth and recovering from pregnancy. So, her training has been even more crucial to make up for that time. Where to Watch Roth Compete

Roth will be competing as part of a 5-person team that is comprised of: Tabitha Peterson, Tara Peterson, Becca Hamilton, Nina Roth, and Aileen Geving as an alternate. The team is coached by Laine Peters. The team has seen success already, sweeping 10 matches in a row and earning bronze at the 2021 Women’s World Curling Championship in May. 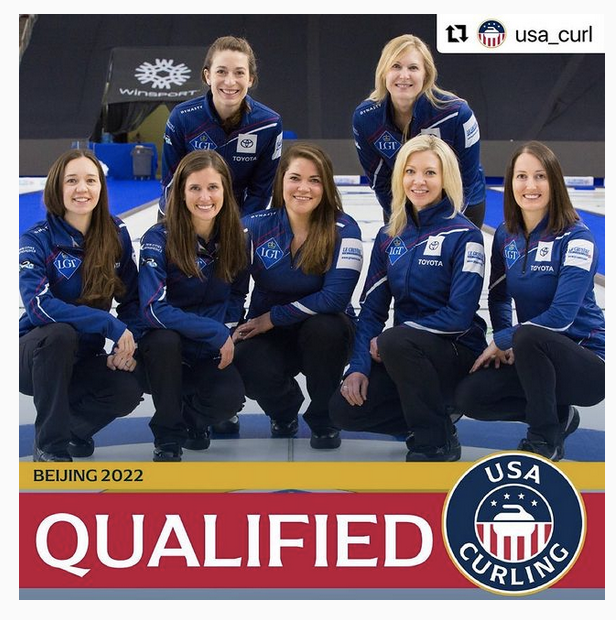 And while the 2022 Olympics are closed off to U.S. spectators at this time (only those in China are allowed to watch), you can still watch this amazing mom and nurse compete from the comfort of your own home. Her first match will take place on Wednesday, Feb. 2 against Australia.