Update: On Monday, Linton was charged with six counts of murder and five counts of gross vehicular manslaughter. Linton could face 90 years to life in prison if convicted. She is currently being held on $9 million bail while detectives and prosecutors determine if drugs and/or alcohol played a factor.

"This incredible tragedy has sent shockwaves throughout Los Angeles and the loss of so many precious lives will have a lasting impact on those that are closest to them," Los Angeles District Attorney George Gascon said in a statement.

Travel nurse, Nicole Lorraine Linton, 37, is accused of speeding through a red light in Windsor Hills, California, and killing six people including an infant, a pregnant woman, and her unborn child on Thursday.

Investigators believe Linton crashed her Mercedes-Benz through traffic at the intersection of La Brea and Slauson avenues going over 100 mph. The speed limit is only 35 mph in that area. Surveillance video shows Linton’s vehicle running a red light and slamming into cars in the intersection, then bursting into flames and being stopped by a light pole.

Authorities took eight people to Ronald Reagan UCLA Medical Center for treatment, including the driver. Six were teens, and one suffered major injuries. 23-year-old pregnant Asherey Ryan of Los Angeles was in the car with her boyfriend and infant. All were killed in the fiery crash. Another victim was found burned in a car and has yet to be identified.

Onlookers rushed to the aid of those that were thrown from their vehicles after the crash. Veronica Esquival told KTLA-TV Channel 5 that a baby came to rest at the intersection. “One of the workers came and saw me with the baby and took the baby out of my hands. Somebody tried to resuscitate the baby, but the baby was gone,” she said 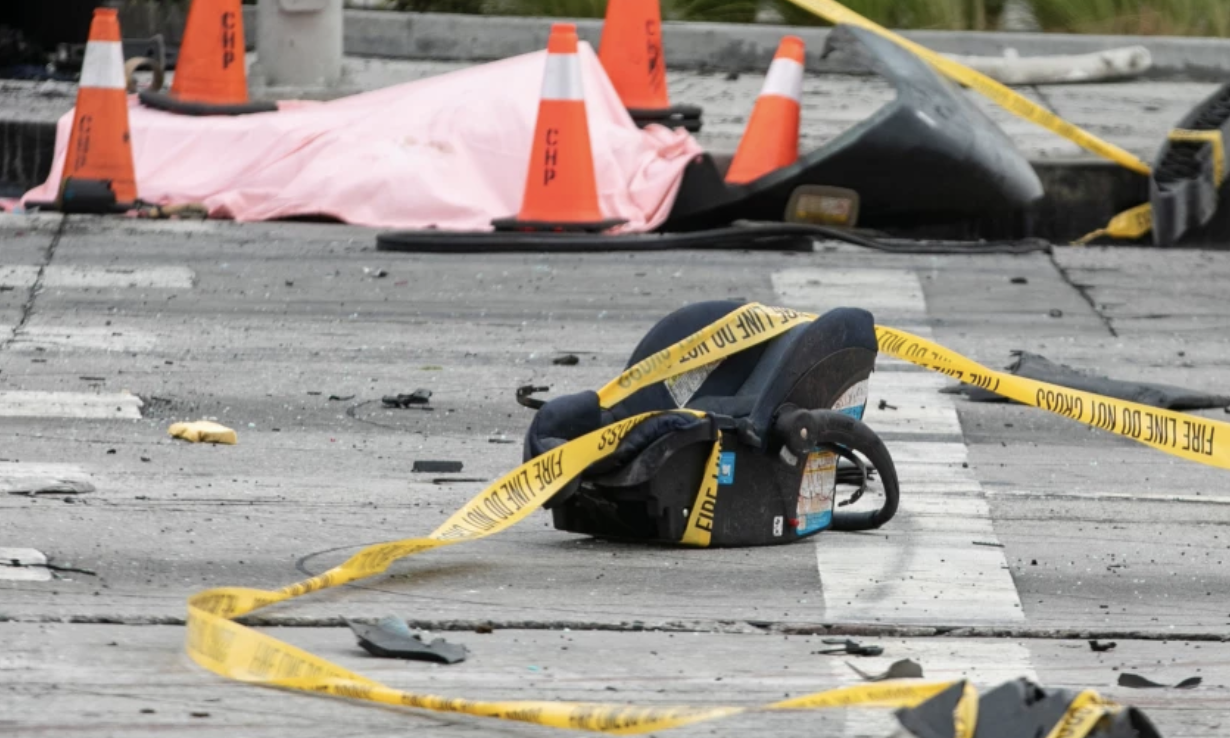 A final determination of charges will be made by the District Attorney's Office. District Attorney George Gascón issued a statement Friday saying his office will be "working with law enforcement throughout the weekend," and the investigation could be presented to his office for consideration of charges "as early as Monday." According to officials, Linton survived the horrific accident and was arrested with gross negligence on the grounds of vehicular manslaughter. She is said to be cooperating with the police. It is unclear if drugs or alcohol were involved. 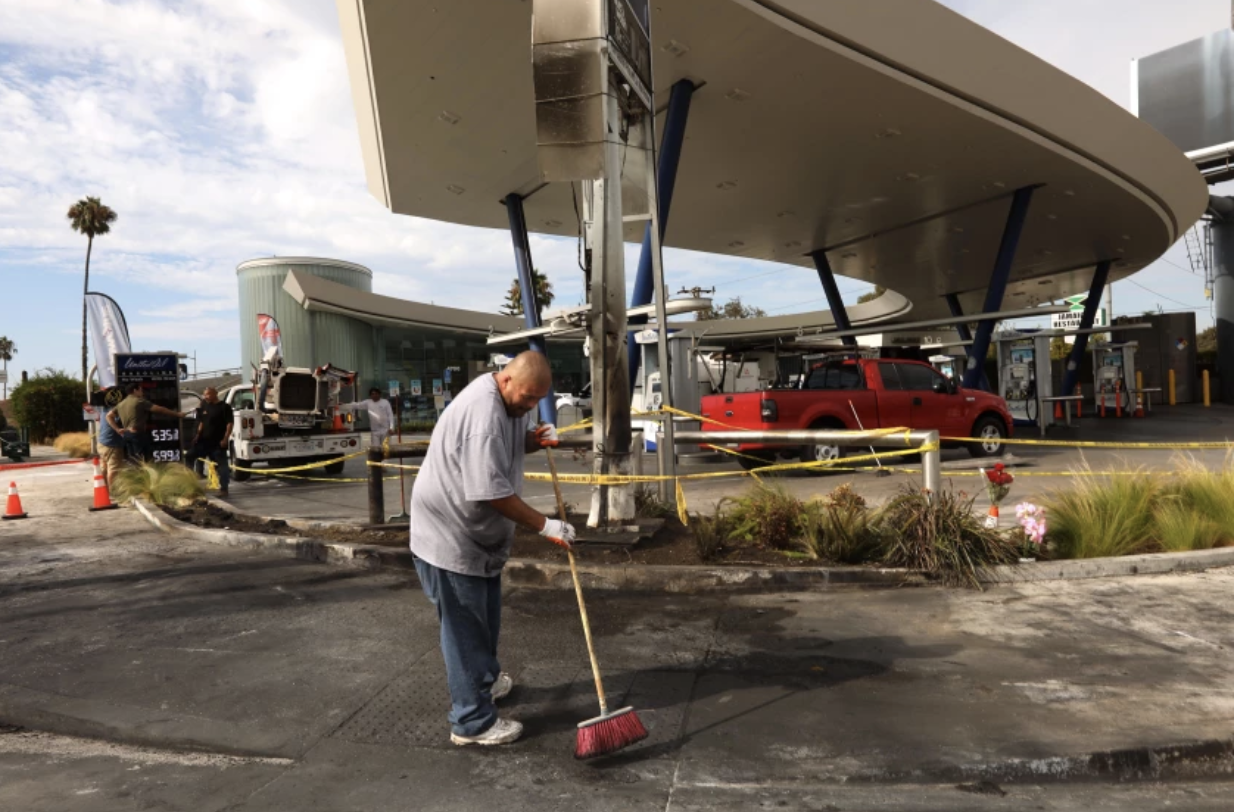 Image: Clean up after the accident

"Preliminary investigation indicates Nicole Lorraine Linton was driving a dark colored Mercedes, traveling southbound on La Brea Avenue at a high rate of speed," according to a CHP statement.

"While driving the Mercedes, Linton proceeded through a red light and collided into multiple vehicles traveling eastbound and westbound on Slauson Avenue. As a result of this collision, multiple parties were ejected and two vehicles were fully engulfed in flames. Following the collision, involved parties were transported to (Ronald Reagan UCLA Medical Center) by ambulance and six individuals were declared deceased on scene," the CHP reported.

"Due to extensive fire damage, it is unknown at this time the make and model of the involved vehicles and which vehicles the involved parties were traveling in," the CHP reported. 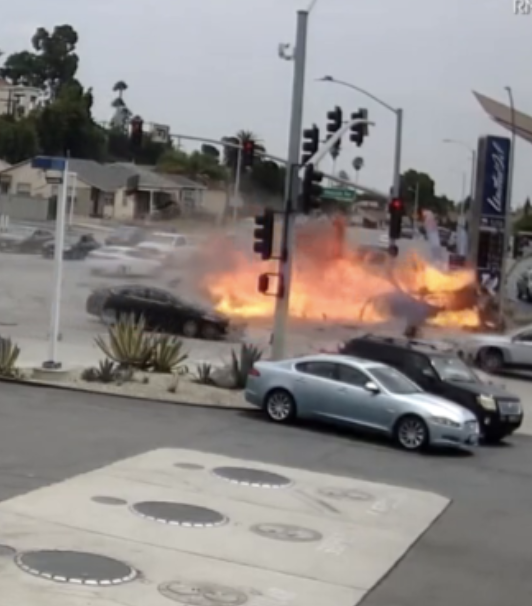 Linton is a travel nurse from Texas that has been working in the intensive care unit at Kaiser Permanente West Los Angeles Medical Center. Kaiser Permanente issued a statement Friday saying, "Everyone at Kaiser Permanente is deeply saddened by Thursday's horrific crash. It's impossible to imagine the pain those involved are experiencing. Our thoughts are with everyone affected by this tragedy. At this time, we are not able to comment on what has been reported as a criminal investigation."

According to officials, Linton survived the horrific accident and was arrested with gross negligence on the grounds of vehicular manslaughter while admitted to the hospital.