Above all else, Berthilde Dufrene, DNP(c), MSN, RN, CARN, one thing of people: to look past each other’s differences and focus on what makes us all similar. If we’re able to do this, she says, we can work together, engage in healthy dialogue, and look to make the future better instead of mirroring ourselves in conflict. It’s a noble mission from a noble person.

Nurse Dufrene is known for her “viral” work challenging a national medical staffing agency, which put up an ad that read “no Haitians” need apply. This set the internet aflame and pushed nurse Dufrene to the center of a conversation on race, ethnicity and employment. Of course, she was on the right side of history.

The stalwart, seemingly tireless nurse, has accomplished many other things in her life. She works in high-security prisons, she is an advocate for mental health and she has striven for relief for Haiti in its time of need. We caught up with nurse Dufrene to ask her about all her hard work and what qualities she thinks a leader should exhibit. 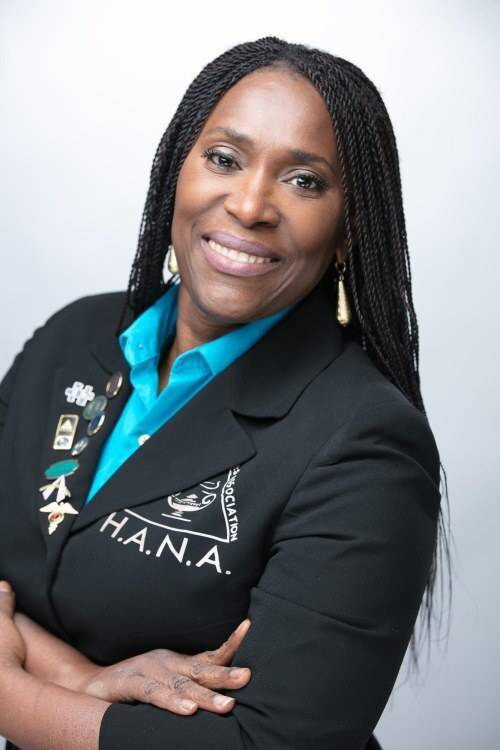 What was your initial reaction when you read the words “no Haitians” need apply in the nurse staffing advertisement?

I was just baffled. Somebody called my attention to the article. I read it and I was like, “What the heck? What?” I took to Facebook and just put it out there, asking people to help me get the word out. This shouldn’t be happening in this time and age.

To think that there are people out there who are in need of a job and they’re not able to get it, or even apply, just because of their race was just appalling. So, I put the word out on Facebook and I went to sleep. It was a Sunday after mass. I didn’t check Facebook all day. But apparently the whole world was looking for me.

When I finally realized that my post had gained a lot of attention  I was like, “Oh my god! What did I do?” But people were like, “It’s not bad, it’s good!” So, I was pleasantly surprised by the fact that people did actually pay attention to what I had to say and wanted to act on it.

We ended up organizing immediately after. I messaged my nurses and also connected with community leaders, the NAACP, human rights people, everybody. We ended up doing a march. I think the politicians called on the Attorney General to investigate the matter. The NAACP sued and were able to get some aid for the United Negro College Fund.

So, a lot of good came from it but there was also bad that came from it - the company ended up closing and moving out of the area. And, of course, that is unfortunate. We wanted the jobs .

I tried talking to the company to let them know that, “no hard feelings, it’s not about you. It’s about that it shouldn’t happen.” They tried to explain the matter away but nothing they did really made sense. Apparently, one of their employees put the ad and the supervisor got fired because the supervisor did not review the materials. A couple of people lost their jobs. Then more people lost their jobs because the company ended up moving out.

What was it like for you personally to go viral in that way?

Initially, I was scared. Because I was like, “What did I do? Who’s going to be hurt by this and will there be any repercussions?” But when I realized this was speaking to the community and paid attention to the amount of people that responded, I did not mind it at all. Again, when I started hearing about the company needing to move out of the area because nobody would do business with them, then I felt bad and I tried to go and reach out to them but by then it was already too late because the whole community had already known about the situation.

What made you want to pursue nursing after making a change from business?

Well, I think nursing chose me. When the company I worked for closed in the 90s, I had the option of relocating to Raleigh, North Carolina, where marketing was going. I decided that I couldn’t go, my children were still small and we needed childcare. So, I looked into what was available out there. I opened the newspaper and every job that was available was nursing. So, I was, like, “Okay, I guess nursing it is! I have to go find a program that has nursing.” That’s how I became a nurse.

When was the first time you saw a real benefit to giving care?

My first rotation in nursing was in the nursing home, caring for older adults. While talking to the seniors in the nursing home I learned so much - hearing about their lives, the things they love most, what they regret, and what they wish they could go back and do. It was then that I just fell in love with caring for people, getting to know people, and learning to talk to new people.

I find that in nursing, you can never be lonely because there are always going to be people all over the place to talk to, to get to know, to care for.

You are the current CNO at the New York State Office of Mental Health. Why is mental health a priority?

Unfortunately, I believe that not enough attention is given to the mentally ill in the United States. In our society, we tend to separate the mind from the body and it is unfortunate because without the mind, there is no body. And yet, we just do not give attention to that particular process. I tell people all the time, the brain is just an organ just like the heart and everything else. The heart can get sick and the brain too can get sick - we have to care for every single part of our body equally.

I work with very vulnerable populations. Not only are many mentally ill but they are also in prison. Our politicians, in an attempt to acquiesce to public pressure, closed all the mental hospitals, too many of them, and pushed the mentally ill out into the community. Unfortunately, they didn’t prepare appropriately for the transition and a lot of the mentally ill ended up in prison. Now, the prison system has become the de facto mental health care system in too many parts of America.

As a result, the prisoners sued because they were not able to get mental health services in prison. And they won. It was deemed that it was cruel and unusual punishment to not provide care to prisoners. Now, prisoners are entitled both to physical care and mental health care.

So, we’re trying to do the best that we can in a situation that is very difficult. We’re dealing with two totally different, opposing philosophies. The Department of Corrections is in business to punish and protect. Security is a big thing for them. And here we are advocating for care for people that are not in custody primarily for care. It’s a constant struggle trying to get relief and advocating for opportunities to care for the people.

What do you notice about the state of health care - or, humanity in general - when you enter into the high-security prisons?

Unfortunately, prisons make people hard. It is very hard. It’s something we have to remind and talk about with our nurses. Like, “Yes the environment is tough but you don’t have to be tougher than your own humanity.” Nurses keep their guard up and maintain their boundaries. But, I encourage them to find the humanity in the other person, to respect the dignity of that life regardless of their crime and regardless of their situation. That mindset makes it very easy to care for the person no matter what.

You’ve seen a lot of sides of modern health care in your career. What’s one thing you wish you could change with a magic wand?

You’ve worked extensively with Haitian organizations to get the region relief. What has your experience there taught you about the world - or two worlds - of healthcare and caregiving?

I think there are multiple worlds of caregiving. Again, depending on where you happen to live geographically in the world determines whether or not you are going to receive medication when you are suffering from pain, whether your child is going to die of simple diseases that humanity has already found a cure for that are easily accessible in one part of the world and not in others. Depending on where you happen to fall in the spectrum life economically determines whether or not you will be able to have services when they are needed.

I volunteer with a group of young people who are Americans and unfortunately aren’t able to access our healthcare system simply because they are over 26-years-old and are working for companies at minimum wage. We try to advocate for doctors to care for them without pay because they don’t qualify for social services. Even with Obama Care, not everything is covered.

I have been working with a young lady who happens to have a fibroid issue and has something growing inside of her stomach. She does have the bare minimum health care that provides preventive medicine. However, she has not been able to afford surgery to have the stomach growth removed since it has not yet been determined that the fibroid can kill her. So, she has to continually suffer without surgery.

You’ve helped to give nursing scholarships to lots of underprivileged students. What is it like to give this gift?

It makes me feel like I am a worthy member of my community, that I am a good co-citizen to my fellow man. We have a nursing shortage in this country and the shortage will continue for years to come.

Nursing is not an easy profession. You have to have the heart, you have to have patience, and the desire to want to do it. There are a lot of people who would love the opportunity to go to college but who cannot afford it. They have the brain for it, they have the aptitude, but not the ability to pay. So, you try to reach as many people as possible. We are always trying to increase the number of scholarships that we give. But so far it’s been difficult.

You’re on many boards and have the responsibility of setting goals for organizations. What do you think is the most important quality a leader of people should exhibit?

Listening. Having the ability to reach people through listening and having the ability to look beyond our individual differences to truly listen. It’s important to remember that at the end of the day - we all have hearts and two eyes - if we concentrate simply on our similarities, we can be happy. We can sit at the table. We can negotiate. We can discuss. We can talk. 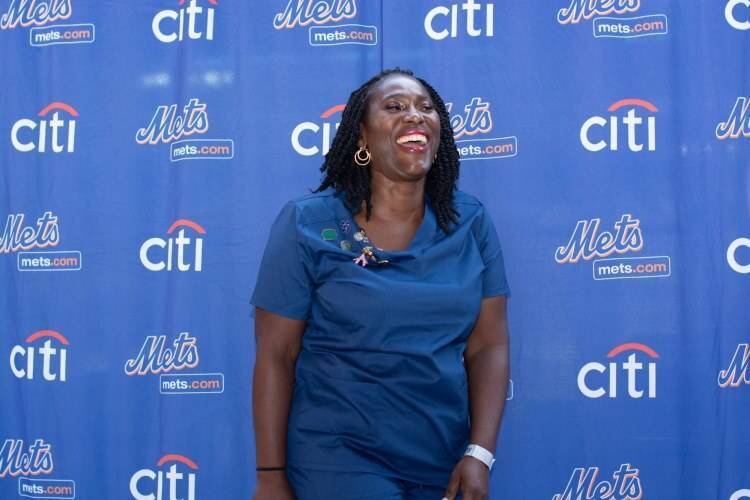 Lastly, what did you enjoy most about your recent New York Mets Nurse Hero Night honor?

Oh my god! It was so wonderful meeting the other nurses, getting to know what they are up to, what they are doing, what hospital they work in and what they themselves are trying to do. Then, at the end of the day, you find out that everybody is pretty much doing the exact same thing. Everybody is just going the extra mile to put themselves out there and to provide the best care that they can. When you talk to all of the nurses, you realize that commonality. 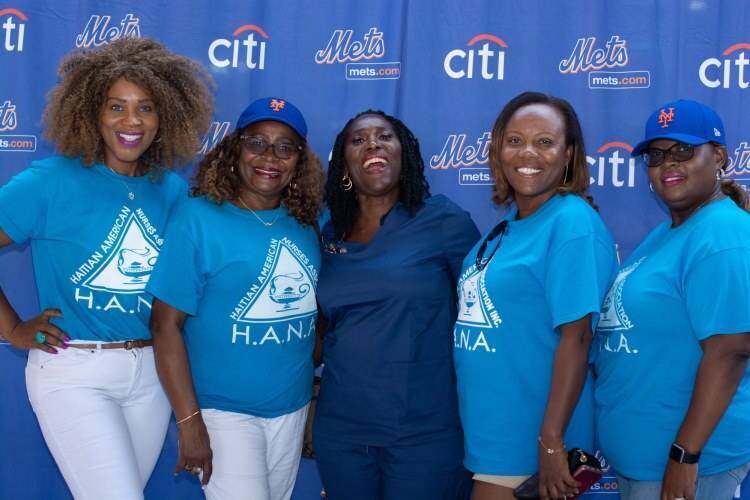 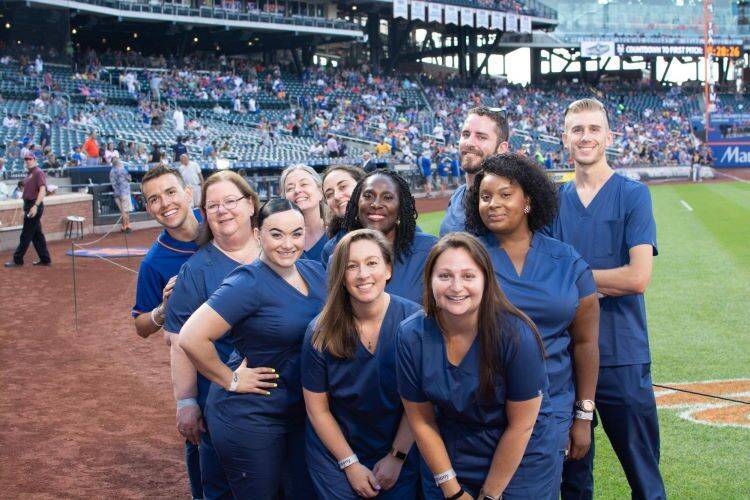