The Journal of Vascular Surgery has had blood pressures rising after it released a study aimed at essentially shaming surgeons--specifically females in swimsuits--on social media.

But the Journal has found itself in unexpected hot water themselves as a result, as the study has been deemed incredibly problematic, as well as sexist. 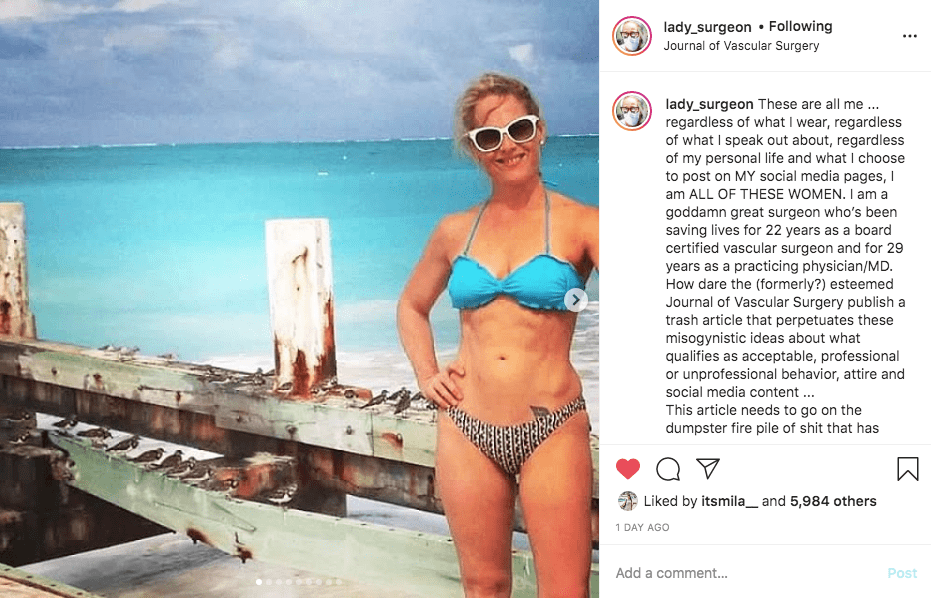 The authors of the study--including one female surgeon--explained that because it’s “been demonstrated” that “publicly available” social media content can affect patient choice of physician, hospital, and medical facility, as well as the “professional reputation among peers and employers,” they wanted to “evaluate the extent of unprofessional social media content among recent vascular surgery fellows and residents.”

What the authors conveniently left out, however, is that in order to do said evaluating, they had to create secret social media accounts themselves in order to follow some of the surgeons, who have private accounts. But details right?

Anyways, that moot point aside, the six male authors and one female author took it upon themselves--and with the approval of their all-white, all-male editorial board  of course--to define what exactly “unprofessional content” on social media consisted of.

They decided “clearly unprofessional content” would include the following:

“Potentially unprofessional content” on the other hand, boiled down to:

Of the 480 vascular surgeons the study examined, the majority were male, but the study authors found that 9 accounts in particular--or 3.8% of the accounts they chose to look at--featured “inappropriate/offensive attire.”

And what, pray tell, counted as inappropriate or offensive attire? Well, as the Journal clearly outlined in its full study, “Inappropriate attire included pictures in underwear, provocative Halloween costumes, and provocative posing in bikinis/swimwear.”

We’ll give you one hint as to how many of the male surgeons that they evaluated were posing “provocatively” in bikinis.

Lest you be confused, let me remind you that this was a very real “clinical research” study in a very real academic journal, presented at a very real medical symposium, specifically the Forty-seventh Annual Symposium of the Society for Clinical Vascular Surgery, Boca Raton, Fla, in March 2019. As in, real money was spent for these doctors to conduct “research” that boiled down to scrolling to find surgeons wearing bikinis on social media. And who’s being accused of being unprofessional here again? 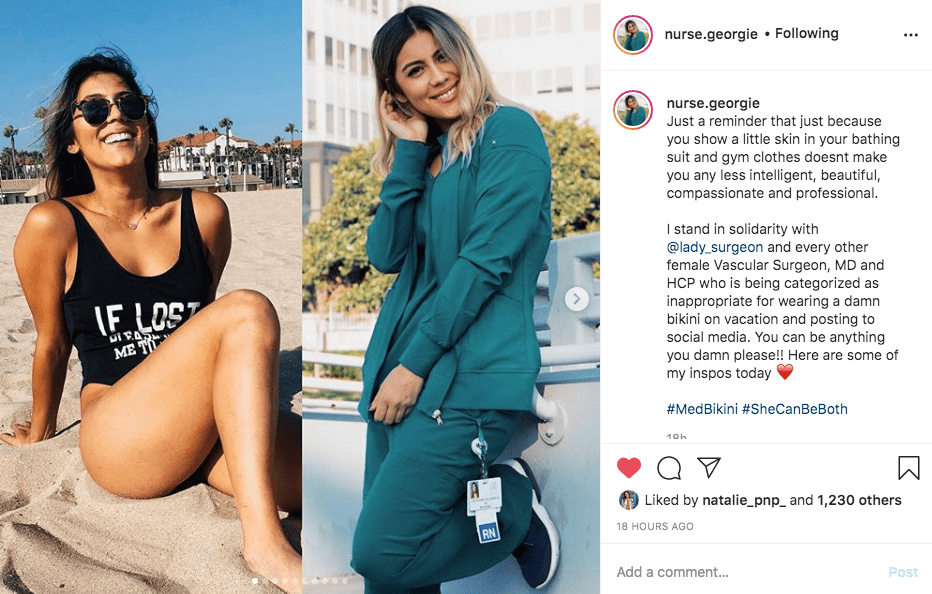 The hashtag #medbikini has been trending, on Twitter and Instagram with surgeons, doctors, and nurses highlighting exactly how professionalism and living a life that includes a social media presence, as well as the perfectly normal ability to go swimming, have a drink, or discuss topics that matter to their real patients from time to time, can co-exist. 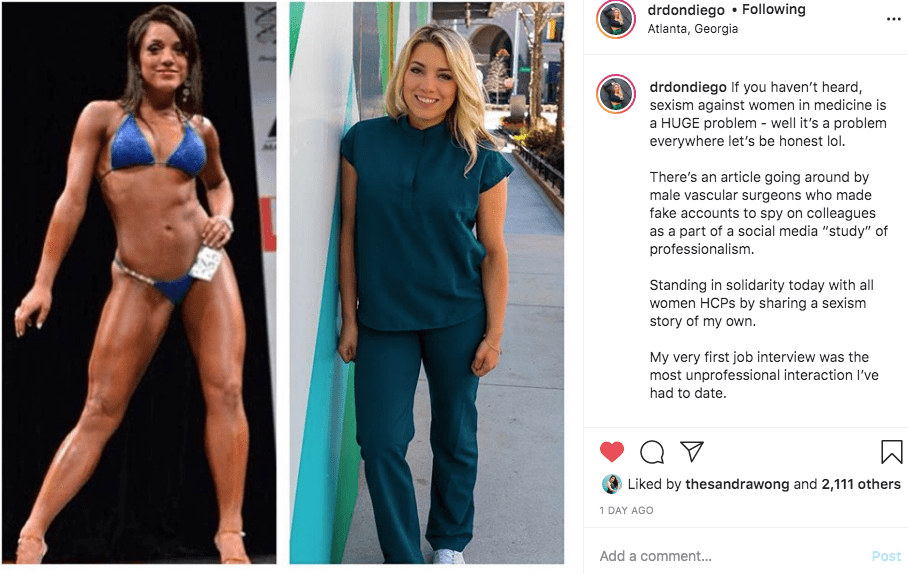 One doctor even shared her own story of how her past as a fitness competitor had been used against her in a job interview--the female doctor interviewing her told her that no one would take her seriously with her “ass all over the Internet.” For simply having a body and sharing her fitness journey, she was shamed. And ironically, Danielle DonDiego, DO, MBA, pointed out how in addition to the many inherent issues with this study, the authors also failed to grasp how social media can be utilized for good in a professional healthcare setting. For instance, she uses her platform to discuss nutrition, fitness, and reaching people in ways that can’t be done in a traditional office setting. 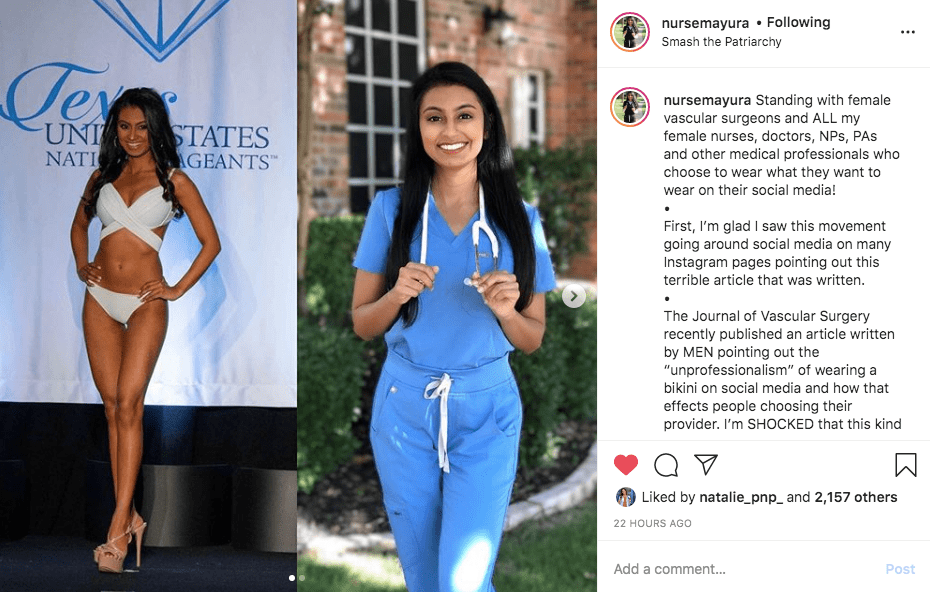 In a similar fashion, many inspiring doctors and nurses have taken to social to post their own #medbikini images, with snaps of them in suits juxtaposed next to their professional work attire. 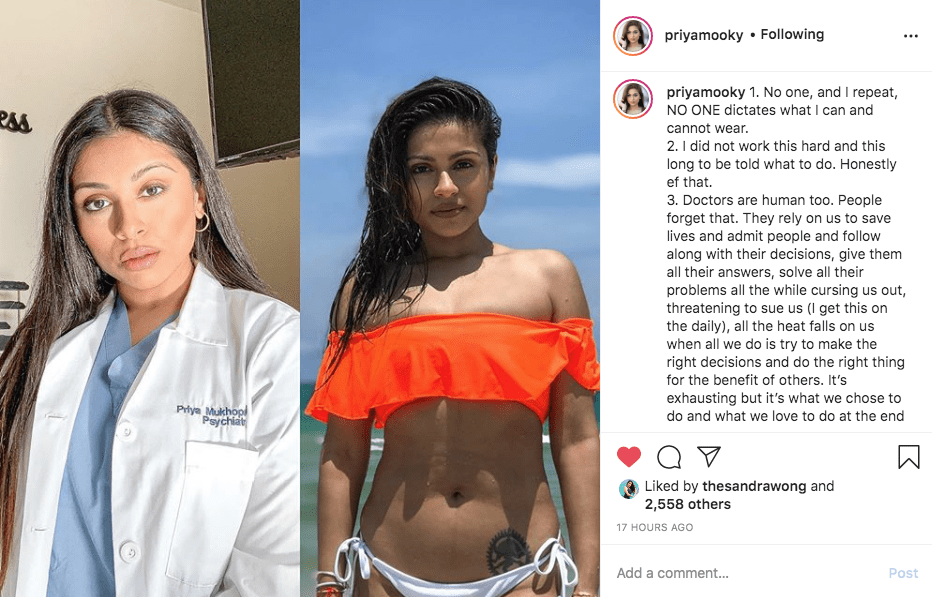 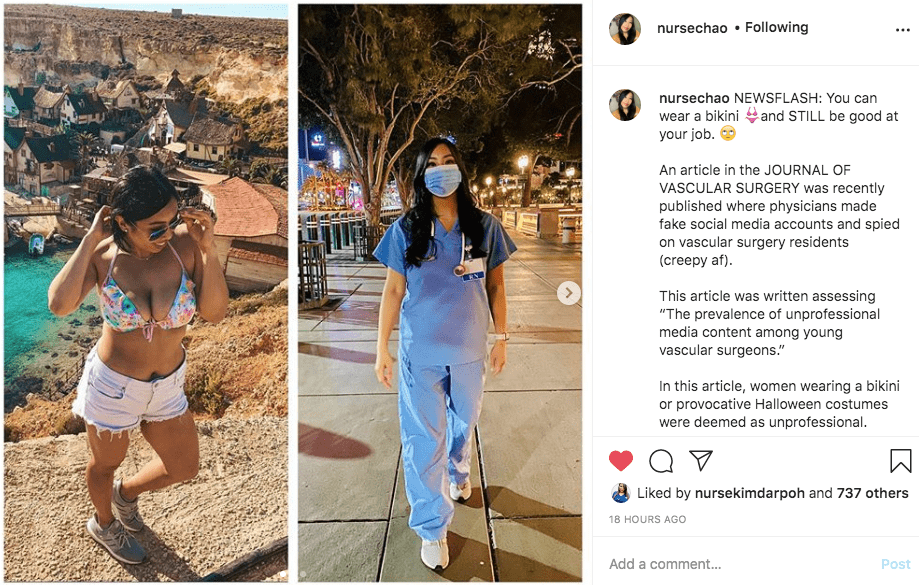 In an “interesting” turn of events, shortly after hashtag #medbikini went viral, Instagram placed a warning on the hashtag stating,

“Recent posts from #medbikini are currently hidden because the community has reported some content that may no meet Instagram’s community guidelines.”

Seriously, Instagram (and whoever reported the images)? On a platform where the Cardi Bs and Kardashians of the world are allowed to post nearly naked photos - you choose to censor THIS hashtag! A hashtag that breaks stereotypes and shows young women that they can be anything they want to be in life. A hashtag that proves women can work in the medical field, be intelligent, educated and compassionate while simultaneously feeling comfortable, beautiful (and dare I say) sexy in their own skin. A hashtag that shows young women and girls real-life role models.

Journal Apologizes and Says They Will Retract The Paper

As you may have guessed by now, the swift outpouring of healthcare professionals and those that support them from across the country quickly reached the ears of the editorial board of the Journal--and on Friday, July 24, they were forced to issue a retraction of the study.

In fact last night, they took to twitter to state that they were removing the paper. 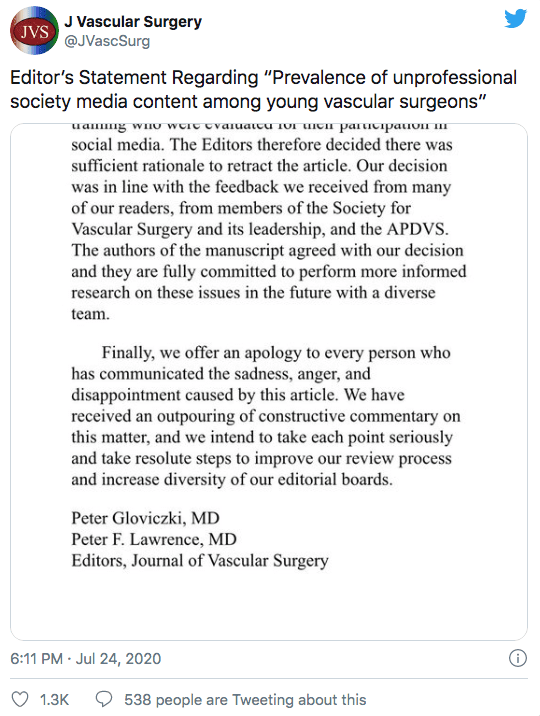 On Twitter, the Journal posted the Editors’ statement, which notes that the authors did not consider the both “conscious and “unconscious” bias in the study, and that because the authors had failed to receive approval from the Association of Program Directors in Vascular Surgery to use its database, the study had merits for retraction. They also stated that the authors of the study will do more “informed research” on future issues with a more diverse team, ending with an apology and a vow to “take resolute steps” to improve their editorial process and increase diversity on their board.

One of the study's authors, Thomas Cheng, posted an apology on Twitter,

So you’re telling me that a bunch of women in swimsuits managed to impact the professional world of healthcare in such a way that a major academic journal had to issue a formal apology and will be changing up its editorial process and diversity?