Get the latest news for nurses
NEWS
September 15, 2021

Brian Cleary, a registered nurse and the CEO and Founder of Krucial Staffing, a staffing agency in Overland Park, KS, that provides both clinical and non-clinical support persons and has staffed many hospitals with nurses during the pandemic, has resigned over allegations that he has supported and promoted an anti-mask group started by his son.

The group, Mask Choice 4 Kids, has a Facebook page that declared that “The mission of Mask Choice 4 Kids is to peacefully and effectively disrupt the education system to produce change and promote giving children and parents the CHOICE to wear masks at school versus a mandate.”

A post from September 9 explained that the group started with “a small group of strong-willed young adults and now has grown into a movement,” adding that the founder--Jacob--could have “never expected or could have predicted its growth.”

That founder is Brian’s son, Jacob Cleary, 19. The group also stated that former Trump advisor and the self-professed former “Trump hype girl” Tana Goertz serves as a spokesperson for the group.

Behind the Mask Choice 4 Kids Group 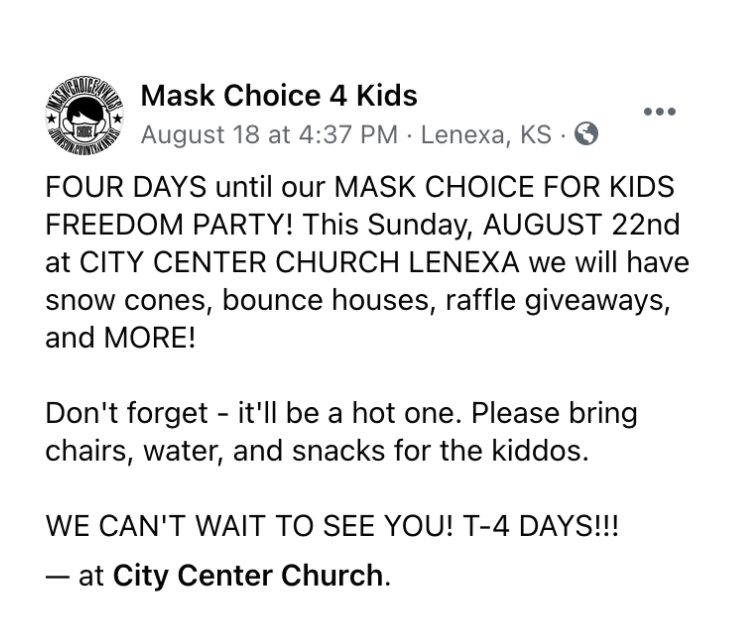 When a comment thread on a “Mask Removal Day” became heated, a Facebook user named “Jake Cleary” defended it. “Our posts will remain positive and about choice. Simply choice,” he wrote. “I do believe peaceful disruption of [the] educational system is a good way to do that. Wish you all could have heard my speech at the gathering Sunday, along with Doctors, and others who believe in freedom. I am certain many will throw hate on this post, but know the silent majority is down with the power to choose! Let's keep our debate positive.” 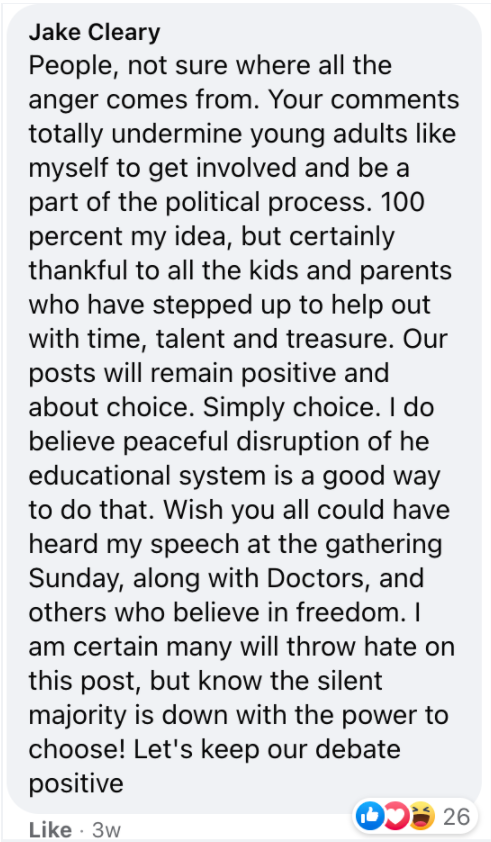 After posting a clip of a local news station doing a piece on the rally, the Mask Choice 4 Kids page commented that the group had been receiving national media attention. “Fox News is interested in having some of us on to talk about the movement and how it's blowing up. #lionsnotsheep,” the page owner commented in the thread.

What Does Krucial Staffing Have to Do With it All?

“Hey guys, new to the group here. My 19 year old son had the idea of mask choice for kids, then a bunch of parents have run with it. Follow us on social media, we are going to be having a rally outside at the next board meeting. Monday September 13th from 5-630 pm. Got to have big numbers, we are shooting for 500-1000. Bring kids neighbors, everyone! Strength in numbers.”

KCUR also reports that it’s not entirely clear what Cleary’s role in his son’s group has been, although it noted that court observers have suggested that Brian Cleary and his middle-school-aged daughter filed a lawsuit against the Johnson County Board of Commissioners for its mask mandate in schools. The attorney who filed the lawsuit neither confirmed nor denied that Brian Cleary was the individual identified only as “B.C.” in the lawsuit.

A Critical Look at Krucial

While Brian Cleary may have filed a lawsuit fighting against masks, it’s not the only lawsuit he’s involved with. Krucial Staffing was also sued in August 2020 by three travel nurses who claimed in their lawsuit that the company sent them to work in NYC COVID units without adequate PPE, forced them to work outside of their areas of competence, and did not provide testing as they had promised.

The lawsuits specifically named CEO Cleary and accused Krucial Staffing of “profiteering from the crisis, putting nurses’ lives at risk, and making promises that its CEO knew he couldn’t keep.” Four other nurses have since joined the lawsuit against Krucial, and it is still pending.

According to the Krucial Staffing website, they are the leader in staffing for emergency and high volume health management in the U.S. and have over 250,000 “krucial reservists'' in their agency for both clinical and non-clinical roles. Their website also states that they are hiring “unassuming, compassionate heroes.” Inc. Fact reports that Krucial Staffing, which has under 100 employees, had a revenue between $10 and $100 million in 2021.

It’s not entirely clear if Brian Cleary’s resignation from Krucial was voluntary or not, but the company has cited it has accepted his resignation. Nurse.org reached out to Krucial Staffing this morning to ask about the allegations and in response, the company explained that they “obviously” understand the importance of masks in hospitals and medical settings. They did not comment on masks in non-clinical settings, like schools.

“In light of events outside our business, Krucial Staffing has accepted the resignation of Brian Cleary. We want to thank Brian for his contributions to our company. Since this is a personnel decision, we have nothing further to say regarding this matter. We have a single focus at Krucial Staffing: Identify and hire the best healthcare personnel to provide the highest level of care to people who need it. We ask our staff to keep that focus in mind as they go about their work each day. Obviously being in the healthcare staffing business, we understand the importance of masks in hospitals and any medical setting. As a company we work to ensure that all our healthcare personnel have the best protective equipment to keep them safe in their working environment.”

According to Brian Cleary’s LinkedIn, as of September 2021, he is now the CEO of Engineer Staffing Now LLC, an engineering staffing start-up.

* Featured images via Linkedin.com and GardnerNews.com