Get the latest news for nurses
STORIES
February 4, 2021

January is National Slavery and Human Trafficking Prevention Month, so Nurse Alice sat down to speak with Pamela Glenn, CNM, MS, a faculty member for Walden University’s College of Nursing who has dedicated years to educating and advocacy on human trafficking awareness.

Nurses in particular, play a unique role in helping to identify and rescue victims of human trafficking. Glenn explains just how nurses can sharpen their skills to screen patients for human tracking and how we can all get involved in the fight against modern-day human slavery. 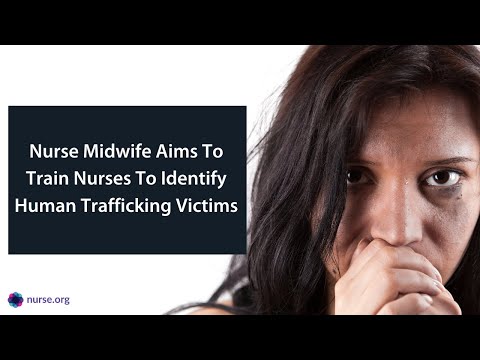 As Nurse Alice pointed out, despite the accuracy and relevancy of the term, some people may feel uncomfortable to hear that the term “slavery” still exists. But unfortunately, the term as it is defined––enslaving another human being––is still relevant to modern-day. We may like to think of slavery as something that only happened in our past, but unfortunately, people are still being enslaved all across the world.

“It’s really important to face reality to really get to the heart of what is really happening and happening right under our noses, frankly,” Glenn says. “I think it’s important to face those realities, no matter how harsh those maybe, because then you can really, truly effectively deal with it I believe there’s power in naming something for what it is and human trafficking is a type of slavery and that’s a fact.”

Although it may be a harsh reality, Glenn added that the majority of human tracking victims in the United States are people that were born here.

Particularly vulnerable are teenage runaways, victims of childhood sexual abuse, those with disabilities, and individuals facing extreme poverty. She also noted that those who have been financially devastated and impacted by COVID-19 have recently become vulnerable too.

Glenn explained to Nurse Alice that victims of childhood sexual abuse very commonly become victims of human trafficking because of the complex ways the abuse they suffer affects them. For instance, they are often abused by someone that they know and may even love, like a family member, and may be charmed by a trafficker who feigns interest in them in order to manipulate them for their own purposes. And because they have been abused, the victim may even form what’s called a “trauma bond” with the trafficker and not recognize that they are, in fact, being trafficked.

Being aware of the realities––and myths––about human trafficking can help nurses and other healthcare professionals become more adept at recognizing who may be a potential human trafficking victim. And any nurse, no matter where they work, may come into contact with an enslaved individual, as hard as that may be to believe. 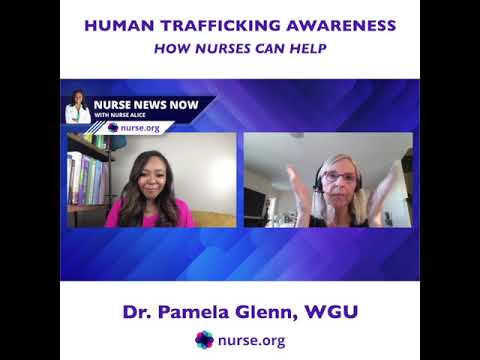 As healthcare professionals, Glenn told Nurse Alice that nurses need to actively work to think through the stereotypes they may believe about human trafficking being only young females brought in from other countries.

Instead, she points out that human trafficking victims can include:

What To Do If You Suspect a Patient is Being Trafficked

Because encountering a victim of human trafficking can happen at any point in the patient care process, from checking in during admissions to collecting vitals to scanning insurance and payment paperwork, Glenn stressed that all healthcare professionals, nursing students included, need to be trained and aware of how to spot a potential victim.

She notes that typically, a trafficker will accompany a victim to a medical appointment and there may be red flags to identify this situation such as:

The biggest challenge when faced with this situation is separating the victim and the trafficker and for this, Glenn recommends feigning the need for a urine sample as an opportunity to ask private screening questions. Most traffickers will not follow you and the patient into the bathroom. When you have the patient alone, she recommends starting the screening by asking basic questions about their living and employment situations such as:

Then, from there, you can move into more detailed questions that can help you discern if the patient may be in an abusive or trafficked situation. If you do suspect your patient or someone else is being trafficked, you can call 911 or use resources from the National Human Trafficking Hotline:

Watch past episodes of Nursing Now with Nurse Alice here.