How to Go From RN to MSN

Local and national nurse associations have responded to Floyd’s death with official statements.

Both National Nurses United (NNU) and the Minnesota Nurses Association (MNA) have released statements in response to the death of George Floyd, a 46-year-old father of 2 daughters, who passed away after being under the knee restraint of a Minnesota police officer for nearly 8 minutes.

Floyd was arrested after a grocery store employee accused him of trying to use a counterfeit $20 bill to purchase food and after he was handcuffed and pinned to the ground, he pleaded with officers that he could not breathe, saying, “Please, I can't breathe...please.” Video captured by both a surveillance camera and a bystander has been shared widely, horrifying the nation and prompting widespread protests and riots in the Minneapolis area.

As advocacy associations made up of nurses and for nurses, both the NNU and the MNA referenced the horror of Floyd’s death and pointed out that nurses have an up-close and personal view of the subtle and systemic effects of racism in our society today.

“As nurses, we see the horrific effects of racism in our hospitals and community every day,” the MNA revealed in their statement. 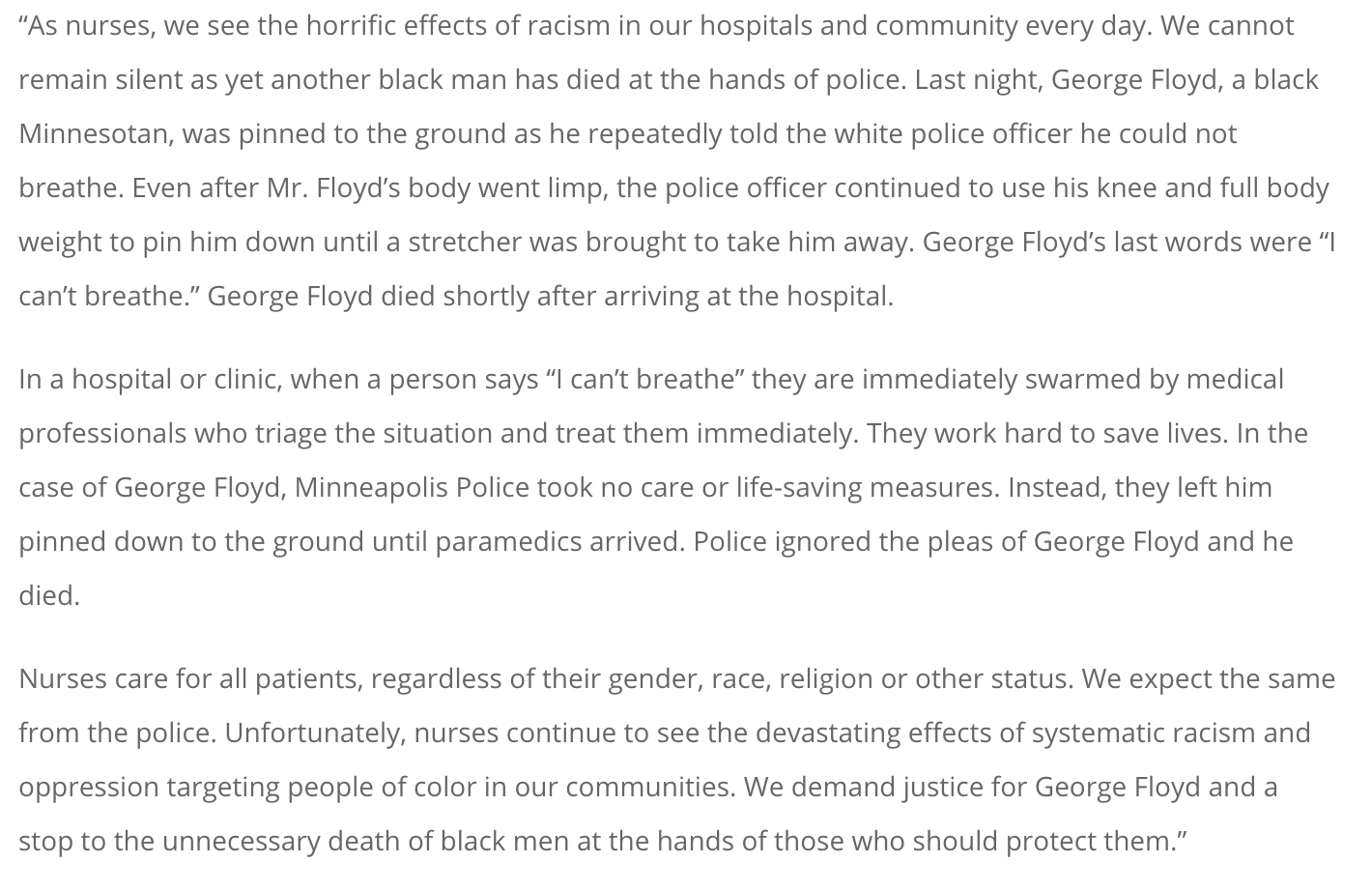 Echoing the MNA, NNU President Jean Ross, RN, who is also a Minnesota resident, said in their own statement.

Racial basis in healthcare has long-reaching and devastating effects on people of color--from algorithms that are used to decide who needs life-saving treatment being biased against black people to black women receiving inadequate pain relief following a C-section to even today’s current pandemic disproportionately affecting black and Hispanic populations because of underlying health disparities.

And whether it’s an officer kneeling on a black man’s neck as he pleads for air, or a lack of access to medical services, the outcome is the same: black lives are being lost at the hand of systemic racism.

A Call to Serve

The MNA went on to add that the links between the professionalism required in positions of service as nurses and members of the police force intertwine under the umbrella of respecting the dignity of all humans, no matter what.

“Nurses care for all patients, regardless of their gender, race, religion, or another status,” the organization stated. “We expect the same from the police. Unfortunately, nurses continue to see the devastating effects of systematic racism and oppression targeting people of color in our communities. We demand justice for George Floyd and a stop to the unnecessary death of black men at the hands of those who should protect them.”

The MNA described how the desperate pleas from Floyd as he struggled to breathe was a clear indication to medical professionals that he needed--and deserved--life-saving measures. Instead, the MNA noted, he was pinned down to the ground and his last words were, “I can’t breathe.”

For both nurses and officers who swear to protect and serve, Floyd’s death violated the code of ethics behind not just humanity, but two of the most important professions in our society.

Social media comments applauded the nurse advocacy organizations for speaking out about the inherent racism in Floyd’s death. “Thank you for standing for all people/ humans. As it should,” wrote one supporter in response to the MNA’s position on Facebook. 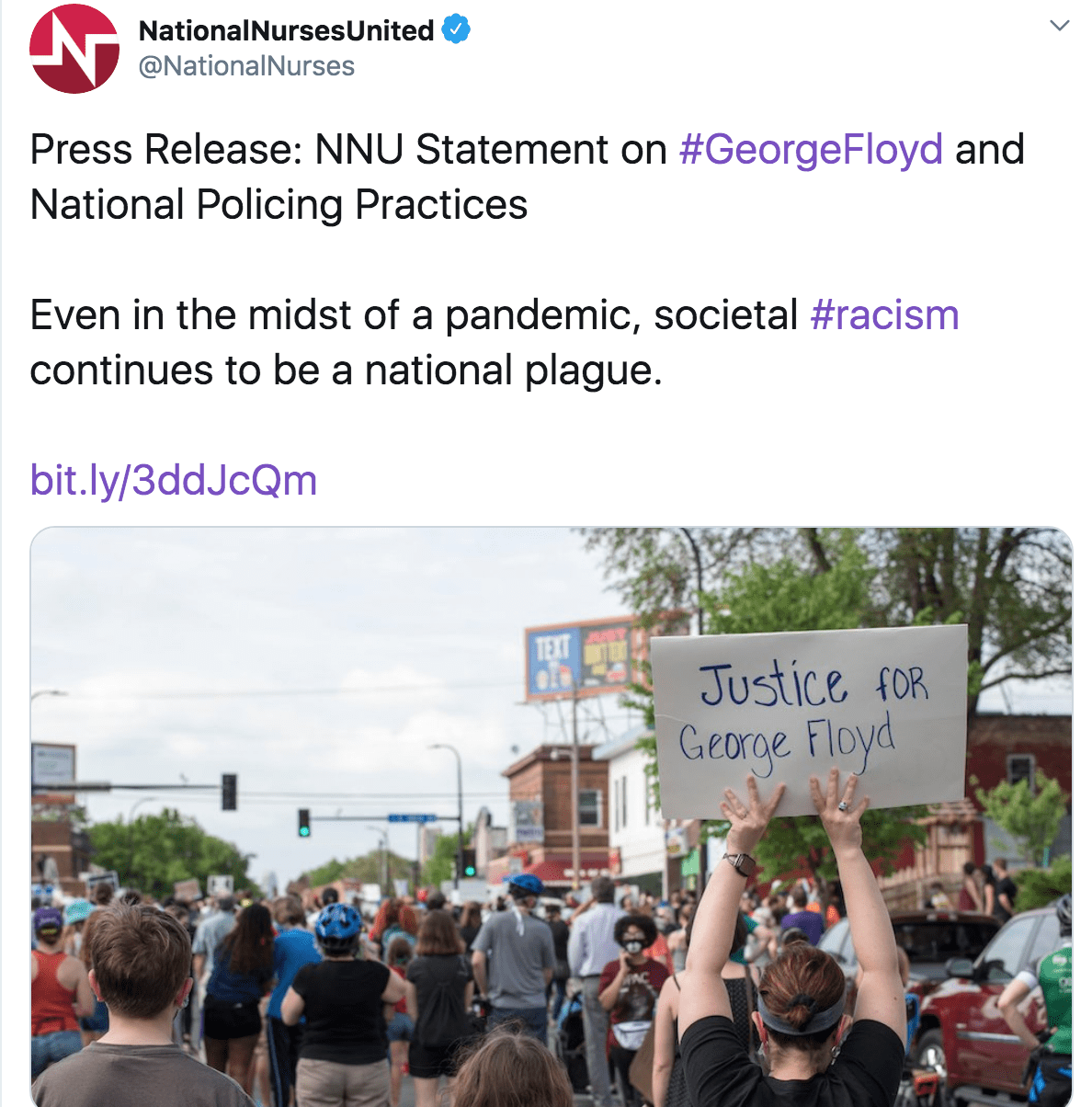 On Twitter, the NNU tweeted its thoughts on the death of George Floyd, writing, “Even in the midst of a pandemic, societal racism continues to be a national plague.”