Yesterday, the Gallup organization released the 2017 results of their poll for the most honest and ethical professions - listing nurses as the top profession for the 16th year!

More than 8 out of 10 Americans describe nurse ethics as "very high" or "high."

In fact, 3 of the professions ranking highest in standards for honesty and ethics are within the medical field, including nurses, medical doctors, and pharmacists.

Congratulations, nurses! Thank you for all you do. 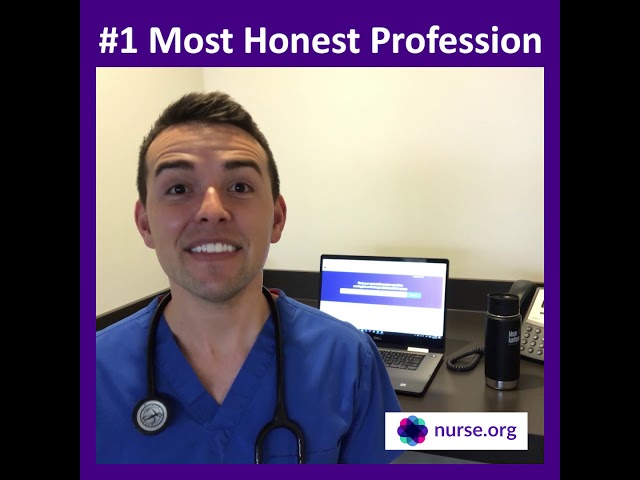 Throughout the early 21st century, nurses have earned top ranking in the annual Gallup poll on ethics and honesty – with the exception for 2001 when firefighters deservedly garnered that distinction following their heroic response to the terror attacks of September 11th. Needless to say, the American public consistently views nurses quite favorably, and the nursing profession continues to serve as the very lifeblood and connective tissue of the U.S. healthcare system.

In December of 2016, the Gallup organization once again announced that nurses continue to hold top honors for ethics and honesty, with 84% of those polled rating those characteristics as high or very high.

By comparison, doctors’ ethics and honesty was rated at 65%, pharmacists at 67%, and dentists at 59%. Coming in at 65%, engineers were the only non-healthcare professionals listed in the top 5. Meanwhile, Members of Congress earned an 8% rating in ethics and honesty, and they were beaten for the penultimate place by car salespeople, who earned a 9% ranking.

Nurses and the Public

As can be readily gleaned from the numbers, nurses soar above all other professions in the public eye; anecdotally, nurses report that strangers and acquaintances alike will frequently wax poetic about the positive attributes of nurses when given the opportunity to tell the story of a loved one who received compassionate or life-saving care from a nurse.

While many members of the American citizenry may be unable to accurately identify more than several common clinical settings or roles for nurses (eg: hospital, physician office, nurse practitioner private practice, home health, hospice), those same individuals will more often than not unquestioningly hold nurses and the nursing profession in high esteem.

With nurse practitioners (NPs) gaining more autonomy of practice in an increasing number of states, the ability of NPs to actively work to overcome a shortage of primary care physicians around the country is strengthened and emboldened.

According to an interactive map on the website of the American Association of Nurse Practitioners (AANP), the number of states offering full practice authority to nurse pratitioners is significant. With full autonomy of practice for nurse practitioners strongly recommended by the Institute of Medicine and other influential organizations in the healthcare arena, the march towards increasing autonomy for NPs around the country continues apace.

The Kaiser Family Foundation , a progressive healthcare policy think tank, believes that “effective integration of NPs in our health care system could help alleviate pressures on primary care capacity”. Thus, as more and more Americans encounter the high-quality direct care of APRNs and NPs, it follows that their estimation of the ethical and clinical value of nurses of all stripes will remain consistently high, and be bolstered by continued positive interactions and experiences.

If one were to type “Gallup poll nurses” or similar queries into any popular online search engine, the number of articles, blog posts, and publications dedicated to nursing’s continued dominance of positive public opinion would be readily apparent.

While some may ponder why nurses rank so consistently high with the public, it goes to show that these stalwart healthcare workers who provide the lion’s share of direct patient care would be the ones who remain top of mind for healthcare consumers and their families. Nurses are the largest segment of workers within the healthcare industry, thus the public interfaces with nurses (LPNs, RN, BSNs, and NPs) on a considerable ongoing basis in an enormous variety of settings.

Whereas physician office visits tend to be brief, problem-focused, and often hurried due to productivity burdens on doctors, it is nurses who spend more time with patients, providing crucial education and the “translation” of the physician’s words into language more easily understood by the patient. Meanwhile, in acute care settings, nurses carry out physician orders, provide direct care, and otherwise interface with patients on a much more intimate level; no wonder patients rate nurses more highly on ethics and honesty – nurses more often take the time for conversation, connection, and education.

According to the Bureau of Labor Statistics, job growth for registered nurses is projected to be 16% between 2014 and 2024; concurrently, job growth for nurse midwives, nurse practitioners, and nurse anesthetists is forecast to be 31%. For comparison, job growth during the same period for physicians and surgeons will be 14%.

With more existing nurses finding employment, and non-nurses entering the nursing workforce in order to capitalize on the exponential growth in the need for qualified nurses, it is easy to conclude that the intersection of healthcare consumers and nurses will continue to mushroom and deepen. This ongoing direct connection between the public and the nurses who serve them will likely increase the number of Americans who look upon nurses favorably.

Nursing will apparently lose no ground in terms of its importance to American healthcare during the course of the early 21st century; thus, nurses’ role will remain a focal point of healthcare delivery and patient care for years to come.

Gallup and the Future of Nursing

No one can presume to predict how long nurses will enjoy top ranking when it comes to public opinion regarding the profession, its ethics, and the important work that nurses do. However, with the undeviating growth of the healthcare sector and the continued projection of nursing’s expansion in both raw numbers and intrinsic value to American healthcare, Gallup will be sure to see nurses retaining a high level of the American public’s trust and positive regard.

Next Up: Nurse Practitioners: Ranked #2 for Top Jobs in 2017