Quiggle Ignacia, a Filipina registered nurse says she was racially and physically attacked by a couple in Glendale, CA. She caught the incident on camera and shared it to Facebook.

Ignacio said in a viral Facebook post, “I’m a good person and a hard worker, follow the law and take care of my patients like my own. There’s no race or color that would change my service to them. I take care of them just like how I would take care of my family.”

Ignacio filed a report at the police station following the incident and was treated for facial injuries, included bruising and swelling. Ignacio posted on Facebook about the violent incident and asked for help in tracking down the couple.

Ignacio says she was eating a meal in her parked vehicle when the unnamed woman rammed her shopping cart, containing a child, into Ignacio’s car. Ignacio looked at the woman after she passed the car. At this point, the woman cursed at Ignacio,  "what are you looking at b*tch? F*** you chinky Asian!"

Ignacio is heard in the video asking, “why are you yelling at me? I should be the one yelling at you because you hit my car.” The other woman continued with the verbal assault - she allegedly proceeded to take Ignacio’s phone and hit her in the face.

According to Ignacio, the man in the video removed the woman from the confrontation and also spewed racial slurs at Ignacio. The couple sped off and Ignacio was unable to catch the license plate number.

According to KTLA, Ignacio then drove herself to a local police station where she filled out a report and was treated by paramedics.

The video has been viewed more than 3 million times. 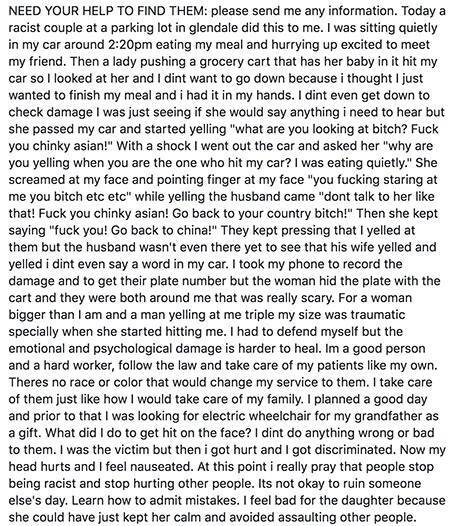