Hazel Hammersly started a movement to change the world through the “great equalizer” of pizza.

When two-year-old Hazel Hammersly--a cancer patient at Children’s Hospital in Los Angeles --gazed out the window from her room that faced the grocery store across the street in July of 2013, all she was hoping for was a friendly wave.

Instead, she started a movement that would touch hearts across the world--and a legacy that will live on even after she was gone.

A Little Girl’s Love for Pizza Changes the World

That fateful day, Hazel’s mother and grandmother used medical tape to create a playful message in her window that read, ‘SEND PIZZA RM 4112.’ 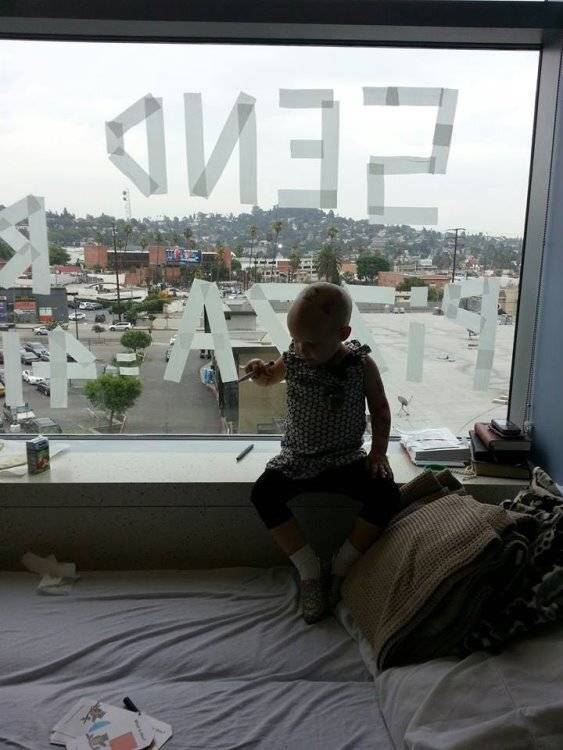 “We thought it was a great idea to brighten her day,” explains her mother, Lauren Hammersly. A few days passed without any pizza being sent, but when a Reddit user shared a picture of Hazel in her window next to the handmade message, the toddler quickly went viral. Before long, people from all over the country were sending pizza to her room--the hospital received so many donations, in fact, it had to ask people to stop sending any more pies and by day’s end, Hammersly says they had received 250 pizzas and fed practically the entire hospital. 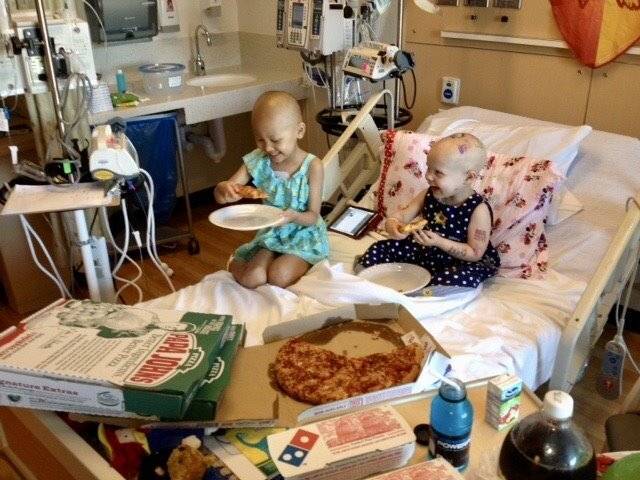 “After that, she became the ‘pizza girl,’” Lauren explains. Hazel the “pizza girl”--whose favorite pizza, by the way, was cheese--soon touched the hearts of many around the country and within the hospital. 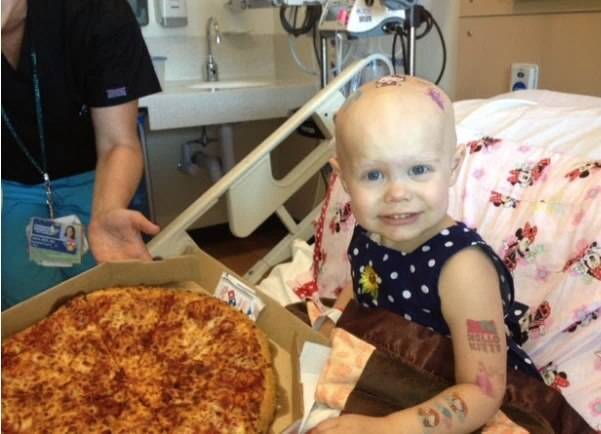 Hazel received her initial diagnosis of a neuroblastoma tumor in her abdomen at only the age of two, and after a grueling 18 months of treatment that included 6 rounds of week-long chemo infusions, 20 bouts of radiation, an 8-hour tumor resection surgery, and a stem cell transplant, she was declared cancer-free the following year. After that, Hazel and her family, which included four other siblings, enjoyed what her mom says were a “two and a half years of glorious cancer-free life.” 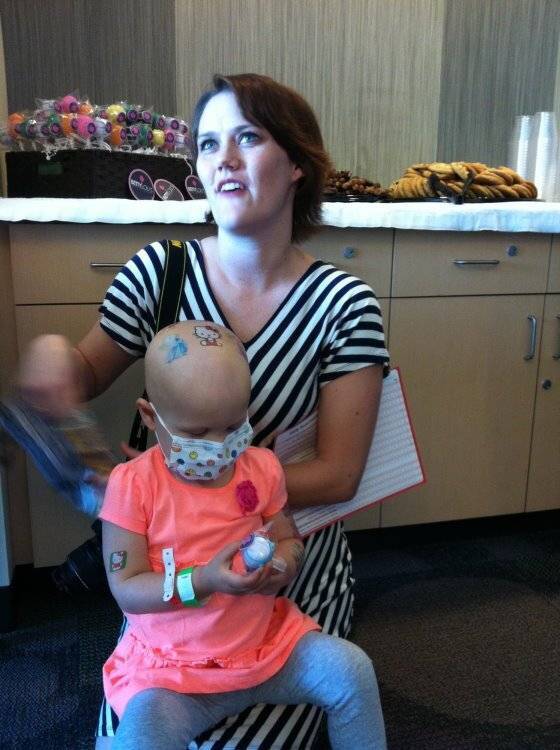 But then, right before Hazel was set to start kindergarten, they discovered the tumor had grown back. And with the type of cancer Hazel had, there is no treatment when it regrows, so the family plunged down a road without knowing what to expect.

“Hazel, in her remarkable way, just faced it,” Lauren remembers. “She was like, ‘OK, this is what I have to do.”

In May of 2016, “Little Hazelnut” beat cancer for the second time. To celebrate, Hazel’s entire family went to Hawaii and enjoyed life together doing their favorite things. But then, in October of 2017, Hazel’s cancer came back a third time, for what would be her final journey.

As the family was preparing for a scan to see how Hazel’s treatments were working, the now 7-year-old was admitted to the hospital for a wet cough. Although they initially thought they were only dealing with a case of pneumonia, Hazel’s condition swiftly deteriorated. In her room, as she was falling asleep in her mother’s arms, Hazel strove valiantly to stay awake.

True to her nature as the pizza party girl, she kept saying, “‘I don’t want to miss the party,’” Lauren remembers. And then, little Hazel asked her mother if she was dying.

Of the many patients that Cara Lunsford, 40, founder and CEO, Holliblu, had cared for her in her 12-year career as a pediatric oncology nurse, she remembers being struck the most by two-year-old Hazel rocking some super stylish head tattoos. “I mean, I’m no stranger to tattoos but head tattoos? No way!” Lunsford laughs. “So maybe they were stick-on Hello Kitty ones, but still, what a rebel!”

In caring for Hazel and other patients in pediatric oncology, Lunsford tells Nurse.org that she was inspired to create a community for nurses and lean on technology to accomplish that. She recalls a time, right before Hazel passed, that the little girl had expressed that it was her dream to hold a kitten--something she had never done.

So, for the next 5 or 6 hours, Lunsford went to work, utilizing all of her social media and app power--“apparently, it was not the season for kittens,” she remarks--to finally find someone with kittens and smuggle them up to the oncology floor to make Hazel’s dream come true.

That experience, says Lunsford, reaffirmed for her that technology can be used to make an incredible difference. “In some capacities, technology brings people together and makes things happen that never could have happened,” she explains.

In embracing the difference she saw technology make firsthand, Lunsford decided to create her company, Holliblu, a web app dedicated to building a supportive sanctuary for nurses. “If there is one thing I’m passionate about, it’s saving the nurse profession,” Lunsford notes. “I mean, what would we do without nurses? It would be like a world without water. It’s just not compatible with life.”

As a professional technological tool, Holliblu helps keep nurses organized, and provides them with a nurse-specific profile to find great opportunities nearby. In the future, the app will also have resources for mental health and making both professional and off-line connections. 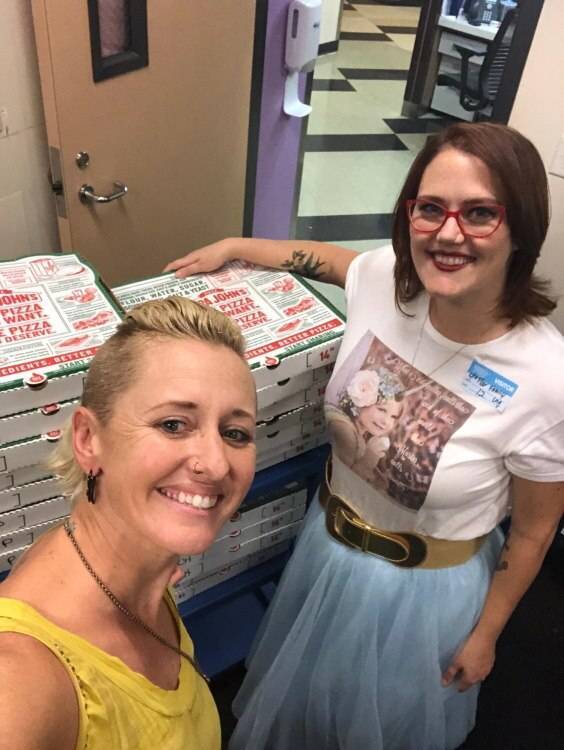 And to kick off those connections and honor the one that started it all, Holliblu has launched their “Cure Cancer, Support Nurses, Eat Pizza” campaign in partnership with Hope for Hazel to send free pizzas to nursing units across the country as a way to support nurses and raise awareness to fund childhood cancer research. 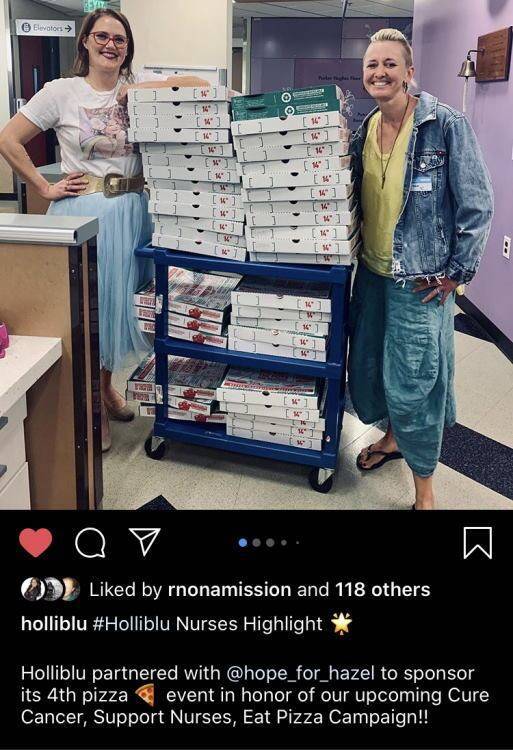 “We thought, ‘What do nurses need most? To eat! And to pee! Since there wasn’t much we could do about the latter we decided to start surprising nurses around the country with pizza deliveries,’” says Lunsford of the decision to begin hosting the pizza parties. The pizza parties also, of course, pay homage to Hazel’s love of pizza and Lauren’s legacy of asking people to #eatapizzashareapizza every year on Hazel’s birthday.

The first official Holliblu pizza party was hosted in Chicago earlier this year, and it was an immediate hit. Today, the company is aiming to host one pizza party a week and is partnering with both local pizza companies and national chain Papa John’s, all with the same intent: to simply be a gesture of kindness and acknowledgment for all that nurses do.

“That is the message we want nurses to take away from this pizza campaign,” says Lunsford. “Sometimes, you should just send pizza.”

How Nurses Can Get Involved

Any nurse, administrator, or just a supporter of the mission can request a totally free Holliblu Pizza Party for their own unit to help raise awareness about cancer research and share Hazel’s story here. Your pizza party will come straight to you, with pizzas hot and fresh from the oven, and flyers outlining the campaign, Hazel’s story, and how to get involved in cancer research.

And if you’d like to donate money to support the cancer research for children like Hazel, Lauren encourages donations to Hazel’s memorial fund with St. Baldrick’s or directly to Children’s Hospital. 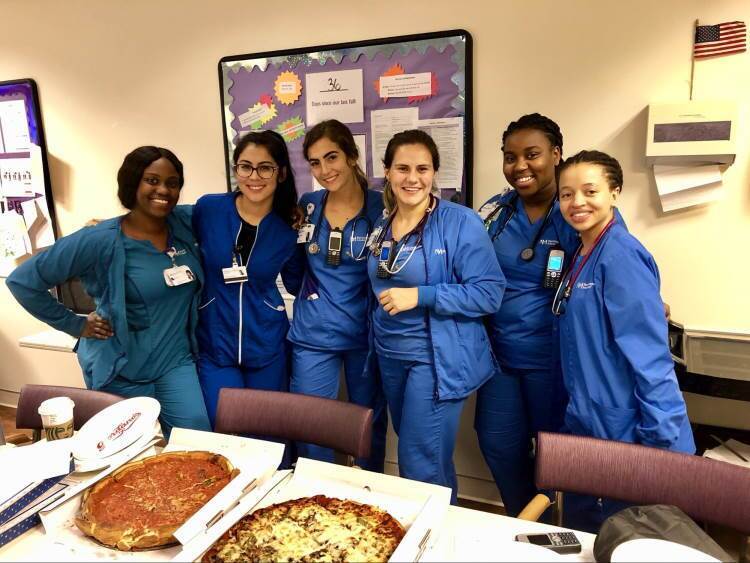 “My ultimate goal is first and foremost to stay connected with my daughter,” says Lauren of both the work that she is doing through sharing Hazel’s story and supporting Holliblu’s pizza parties. “Second is to share her with the world so other people remember her and her joy. Pizza is such a great way to be uplifted in times of struggle, and to infuse her spirit into other people’s journeys.”

You can also follow Holliblu for updates on the app and Hope for Hazel for news about Hazel’s family and the book that Lauren is working on about Hazel’s life and legacy. The company is also looking for Nurse Ambassadors to help support and launch the pizza party campaign, so if you are interested in becoming an ambassador you can email [email protected]. 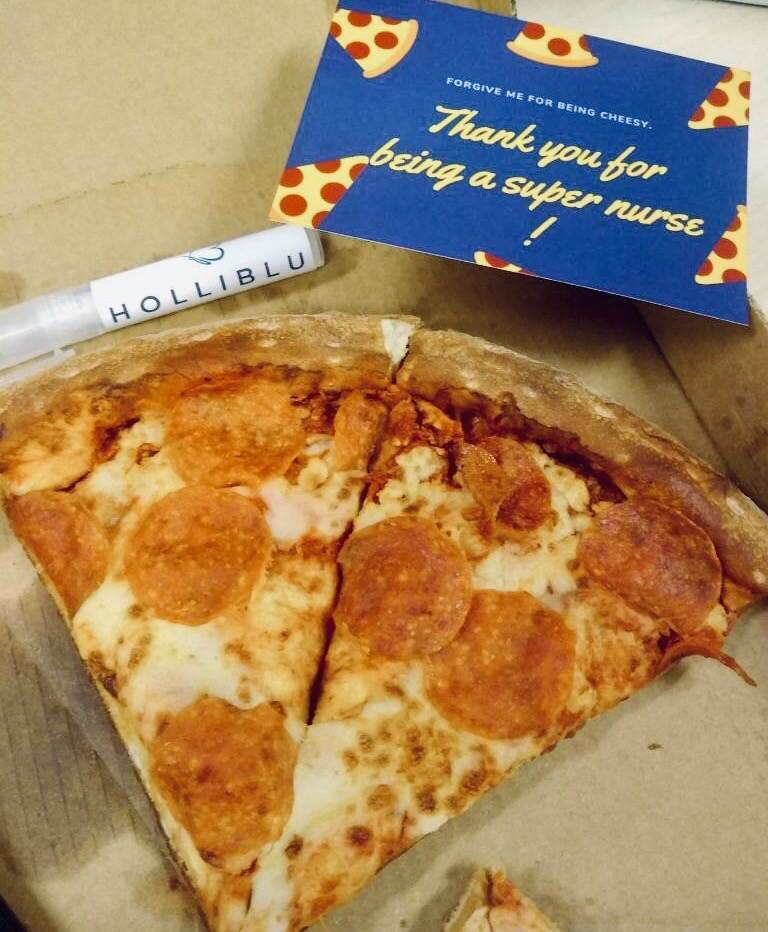 So far, Holliblu has hosted 7 pizza parties and will be continuing their campaign by hosting a pizza party for nurses every Friday! 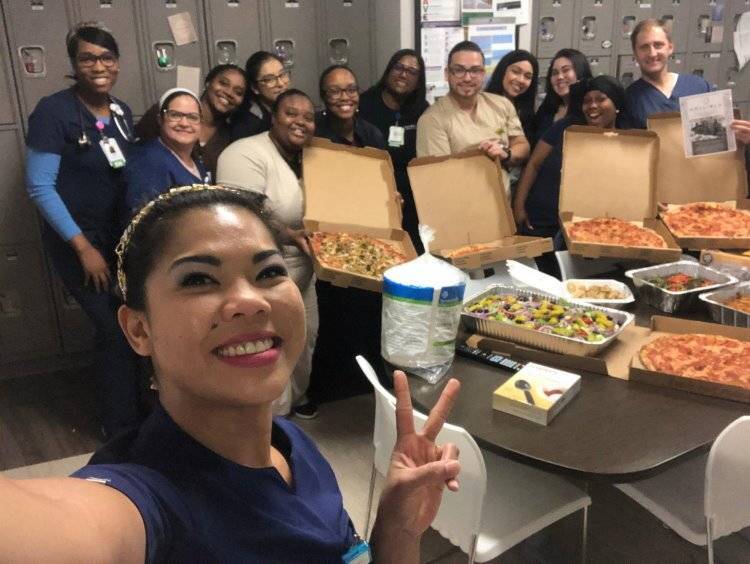 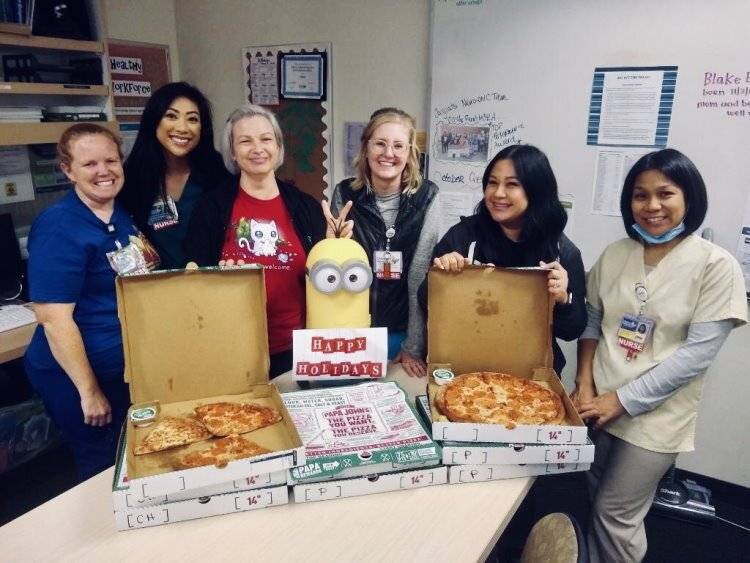 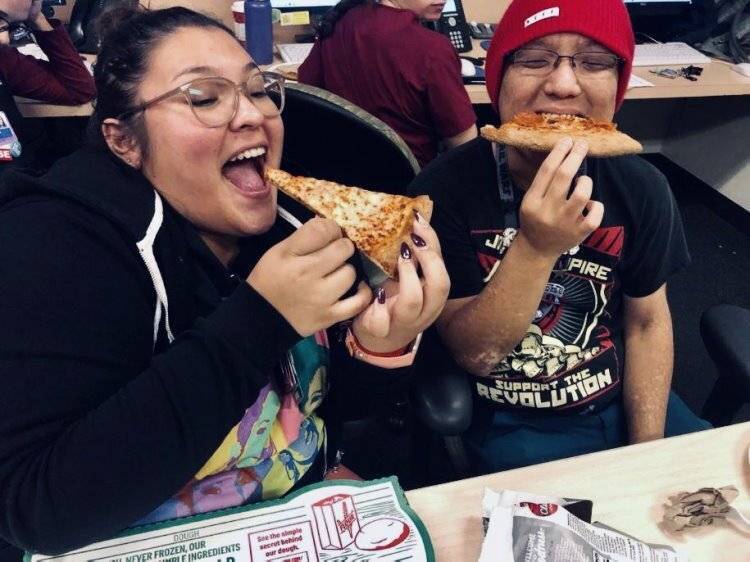 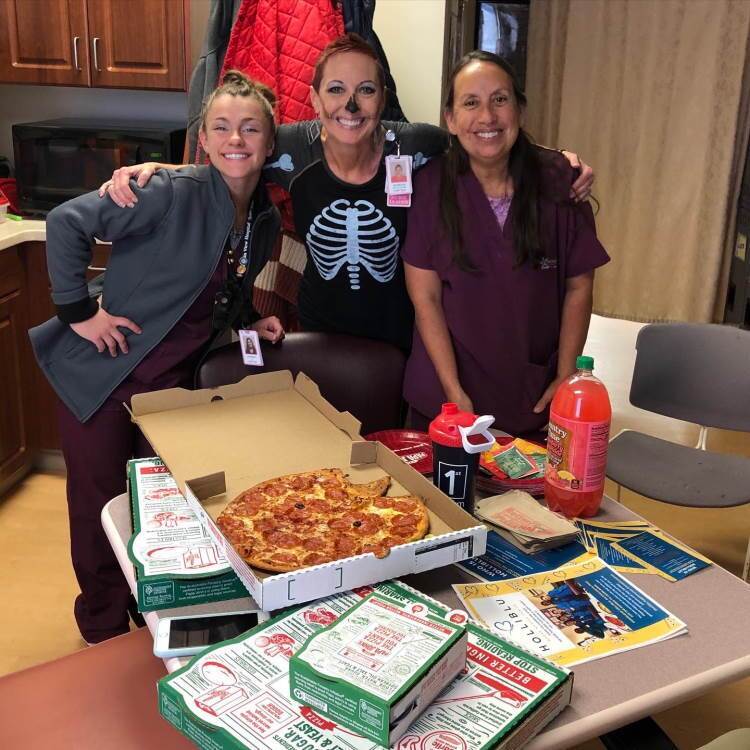 Whether you host your own pizza party, download the app to connect nurses, or simply spread the word, don’t forget what may be the most important act of all--

To think of little Hazel and her big spirit anytime you enjoy a slice. 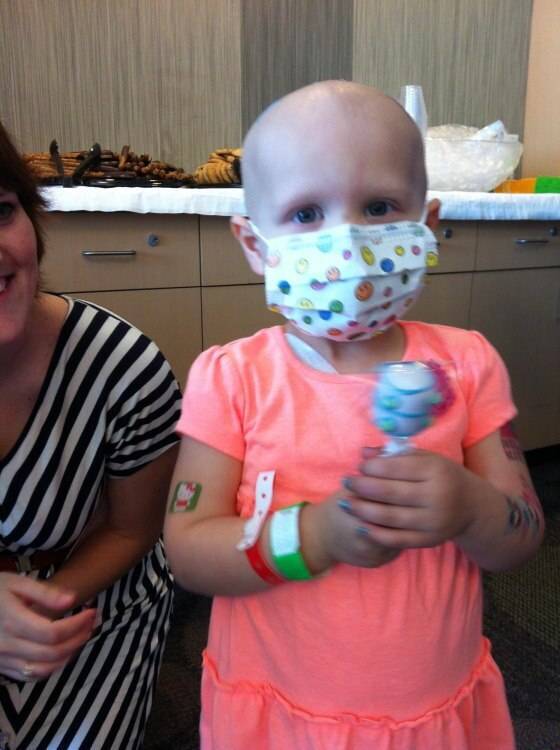 Learn about the pros and cons of private student loans to figure out if it's the right choice for you. Spending time understanding your options may save you a lot of money later on.
View Guide