Why Is This Hospital Worker Cropped From TIME 'Person Of The Year' Cover?

The #MeToo movement empowered women across the world to break their silence on sexual assault. The response was so powerful that TIME magazine revealed their 2017 “Person of the Year” as the “Silence Breakers” - brave women who have spoken out about sexual assault in the workplace. 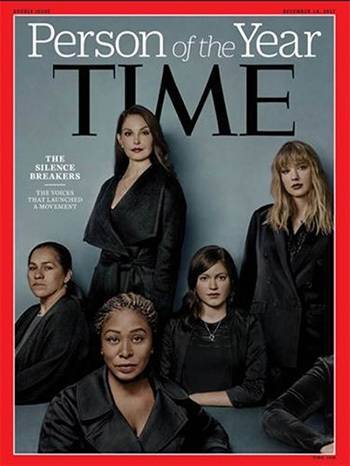 Who Does The Mystery Elbow Belong To?

At first glance, you may not notice the elbow of the cropped out figure in the bottom right of the cover photo. However, many did notice and speculated about who the mystery woman might be and why she was cropped from the photo.

She’s a hospital worker who has chosen to remain anonymous.

Her image represents those women who won’t or can’t come forward about their sexual assault experiences at this time, for whatever reason. Her presence is an act of solidarity and signifies “all those who could not speak out,” explains the magazine.

The full story reveals the anonymous woman is a 28-year-old hospital worker from Texas and also a mother of two. She has been sexually harassed multiple times by an executive at the hospital where she works. The article further discloses that she has made several complaints to the Human Resources department.

Her choice to remain anonymous was to protect her and her family’s livelihood. She fears the consequences she’d face at work and within her small town if her identity was revealed.

From inappropriate patients to superiors to fellow nurses - most nurses will experience some form of sexual harassment at some point in their career.

As Belinda Heimericks, Executive Director of the Missouri Nurses Association explains, “I suspect that if you ask nurses if they’ve been harassed by patients, a majority would say yes. Nearly every nurse will run into it at some time in their career.”

The cover also features women who were able to speak out about their sexual harassment experiences. Including, agricultural worker Isabel Pascual, Lobbyist Adama Iwu, former Uber Engineer Susan Fowler, Ashley Judd and Taylor Swift. A powerful image that we’re in this together.

If you are a victim of sexual assault, call the anonymous National Sexual Assault Hotline at 1-800-656-4673.

UP NEXT: Sexual Harassment In Nursing - It's More Common Than You Think.